Michelle Obama Is ‘Concerned’ for Women Who Voted for Trump 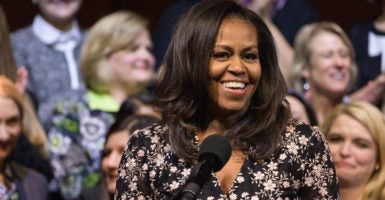 Still struggling to come to terms with the results of the 2016 election, former first lady Michelle Obama said she’s concerned for women and “how we think.”

“In light of this last election, I’m concerned about us as women and how we think,” she said at the United State of Women Summit in Los Angeles over the weekend. “What is going on in our heads where we let that happen, you know?”

Obama referred to Clinton as “the most qualified” candidate running for president in 2016, and said voting against her “says something about where we are.” That’s despite the multiple investigations, and of course Clinton’s uncanny inability to connect with the American public.

“When the most qualified person running was a woman, and look what we did instead, I mean that says something about where we are,” Obama added. The comments reflected similar ones made in September 2017, where the former first lady infamously said “any woman who voted against Hillary Clinton voted against their own voice.”

“Choice,” according to Obama and her fellow feminists, has evolved to mean supporting Hillary Clinton—or whoever the Democratic candidate is of the day—based on your body parts. (Pay no mind to Sarah Palin or Carly Fiorina, however.)

Although it sounds nice coming from celebrities and former first ladies (and comes with swag galore), doing what you’re told is hardly empowering—in fact, it’s oppressive.

However loud, the message hasn’t worked. In the 2016 election, 52 percent of white women, 4 percent of black women, and 25 percent of Latina women voted for Donald Trump. Today, despite multiple scandals and investigations, 41 percent of Americans approve of the president—and 52 percent approve of how he’s handling the economy.

Sure, Trump is an imperfect human who has given women a reason to oppose him. But whether or not his allegations are justifiable based on a greater policy goal isn’t up to Obama to decide. It’s up to the individual—something the feminist movement has forgotten.

As for her question—“What is going on in our heads?”—I can’t speak for everyone, but jobs, tax reform, a strong national defense, and an educational system that works for all were a few items on the docket in 2016. And from the sound of it, these issues required far more more thinking “in our heads” than the decision to vote based on your body parts. But as always, we appreciate the concern.