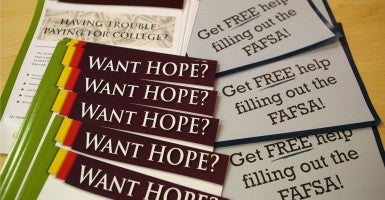 Materials for participants sit on a table at a financial aid workshop in conjunction with the Georgia Student Finance Commission to help parents and students with questions about the FAFSA at Banneker High School on Thursday, Feb 19, 2015, in College Park, Ga. (Photo: Curtis Compton/TNS/Newscom)

Erroneous information given to Affordable Care Act enrollees on a crucial form needed to file tax returns will delay refunds for tens of thousands of Americans. Now, students applying for federal and state financial aid can feel the effects of the government’s mistake, too.

The IRS announced last month that close to 1 million HealthCare.gov customers received the wrong information on 1095-A forms, which are needed to file taxes. The error is causing delays in their ability to file returns and receive refunds.

Those delays could affect students filling out Free Applications for Federal Student Aid (FAFSAs), as the current year’s tax returns are needed to apply for and receive financial assistance from the federal government.

“I am in a huge mess,” a commenter on the blog for TaxAct, a free tax preparer, wrote late last month. “I have to get the taxes done so i [sic] can get the FAFSA rolling before the deadline. Indirectly, one form is messing with my whole life.”

According to the post, the user selected an insurance plan in Maryland and was told her 1095-A form was sent Jan. 31. By Feb. 24, however, the commenter still hadn’t received the form.

“This thing is all having a cascading effect,” Ed Haislmaier, a health policy expert at The Heritage Foundation, told The Daily Signal.

“This thing is all having a cascading effect,” said Heritage Foundation health policy expert Ed Haislmaier.

One of the major aspects of the Affordable Care Act touted by the law’s proponents and the Obama administration is the ability for consumers to receive subsidies.

Those who did so must reconcile their tax credits.

To determine how much recipients may owe or receive from the IRS, the state and federal health insurance exchanges provide them with a 1095-A form, which includes the cost of the second lowest silver plan in their area—which is used in calculating the subsidies—and how much they actually received each month.

Though the majority of filers who earned subsidies were sent the correct 1095-A form, the Internal Revenue Service announced last month that 800,000 HealthCare.gov customers received the wrong information on the document.

In California, which operates its own exchange, 100,000 consumers also received 1095-A forms with erroneous information.

To remedy the issue, government officials requested those affected delay filing their tax returns. For the estimated 50,000 who already did so, the Department of Treasury announced last month those individuals would not have to amend their returns.

To fill out a FAFSA, students need either the current year or previous year’s tax return, among other documents, Karen McCarthy, senior policy analyst at the National Association of Student Financial Aid Administrators, told The Daily Signal. And though students have the ability to fill out the application using estimations of data on their returns for this year, the FAFSA will have to be amended in the future.

Shortly after April 15, the Department of Education will reach out to applicants who filed FAFSAs without the current year’s tax return and asks them to update their information.

Whether the delay in the information impacts the aid students can receive depends on the institution, as some financial assistance is awarded on a first-come, first-served basis.

McCarthy specifically pointed to Pell Grants and student loans as aid packages that are available to students regardless of when they apply. By contrast, others like supplemental grant programs, federal work study, and institutional and state aid have “limited dollars.”

For some students, colleges request a federal tax transcript—which includes tax return information—from the IRS in addition to what’s provided on a FAFSA. The tax transcript serves as a way for schools to ensure that the data on the FAFSA matches what’s on the applicants’ tax returns, McCarthy said.

Each year, the Department of Education selects roughly 30 percent of FAFSA applicants for verification, in which tax transcripts are requested, she said. Some applicants are randomly selected, and others are flagged because of inconsistent answers on the form.

In addition, individual institutions also select applications for verification, which can include the whole pool of hopeful students.

If there’s a delay in filing tax returns and a tax transcript from the IRS is requested, there could be issues with students receiving their aid.

In an email to The Daily Signal, Mark Kantrowitz, senior vice president and publisher of Edvisors.com, said delays in filing tax returns wouldn’t derail a student’s eligibility for aid. However, he did say that it could lead to a lag in when students receive their financial aid.

>>> The Government Gave Close to 1 Million HealthCare.gov Customers the Wrong Tax Information. Here’s Why That Matters.

The IRS hasn’t yet said if the correct 1095-A forms were sent to those who received the wrong information, and the deadline to file returns—April 15—is quickly approaching.

For students filing FAFSAs, though, deadlines aren’t as concrete.

The federal government requires those requesting aid for the 2015-2016 school year to complete their forms by June 30, 2016. But the Department of Education encourages students to apply as early as possible, as aid is limited.

Though students have more than a year to complete the form according to the federal deadline, states and individual colleges set their own, which range from Feb. 15 to June 30. States like Washington, North Carolina and Kentucky encourage students to submit their FAFSAs as close to Jan. 1, 2015 as possible. Others like Montana and Maryland had a March 1 deadline, while South Carolina and New Jersey require students to submit their FAFSAs by June.

A spokesman for the Department of Education told The Daily Signal the agency hasn’t had an increase in call or chat volume from students who were experiencing problems with filing their FAFSAs because of delayed tax returns. The spokesman did not respond to additional questions.

The IRS also did not respond to The Daily Signal’s request for comment.

McCarthy told The Daily Signal it’s likely students filing FAFSAs who are delayed in filing their tax returns because of erroneous 1095-A forms are on a case-by-case basis. However, she reassured students their questions can be answered by the institution they would like to attend.

“If they do have a delay in being able to file their tax returns that’s beyond their control, I would encourage them to get in touch with their financial aid office to find out about if there is any impact,” she said.