The World Is Becoming More Dangerous. So Why Are We Letting Our Military Power Decline? 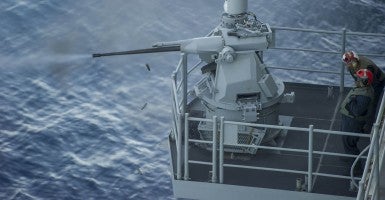 The world seems to be becoming more dangerous these days. Not so coincidentally, America’s military power continues to decline rapidly.

Before considering how and why, here’s a snapshot of what’s happening around the globe:

In times past, the United States would have risen to such challenges to its security interests and to the existing global order, as it did when the Soviet Union or China sought to export their brands of communism. America’s confident strength steadied friends and allies and pushed back against belligerent opportunism.

But those days appear to be receding. The U.S. has elevated other interests to higher priority (as a look at the federal budget readily shows), and the U.S. military’s ability to protect America’s global interests is in freefall.

In fact, the U.S. military now finds itself in a state where it would be unable to successfully handle two major conflicts in different parts of the world, a long-held objective of national security policy.

America’s Navy, at 285 ships, is approaching pre-World War I levels; its Air Force flies planes more than a quarter-of-a-century old (some more than a half-century); the Army is approaching half the size deemed necessary just a few years ago; and the Marines, with demand for their shrinking force at record highs, have committed indefinitely to near-continuous rotational deployments of their operating forces.

This problem did not suddenly emerge. It has slowly, but relentlessly evolved as funding for the base budget has declined in constant dollars, and the cost for manpower, equipment, and weapons has steadily risen. Extended production timelines for expensive, high-end platforms, sustained use of the force for the past decade or more, and lack of funding to replace items that are retired or lost in combat, have combined to result in a force that is older, smaller and more worn out.

All the details can be found in The Heritage Foundation’s inaugural Index of U.S. Military Strength, an annual publication that assesses the condition of America’s military forces and their ability to meet national security requirements. It also evaluates the condition of key allies and their regions as they affect the ability of U.S. forces to conduct operations abroad, as well as who poses direct, high-level challenges to U.S. national security interests.

Some may suggest looking to America’s allies. Though reasonably stable and steadfast, they are less capable due to their own neglect of their military forces. We can’t assume they’ll be able to contribute much. Further, competitors that pose serious challenges to America are investing heavily in military capabilities carefully matched to their own circumstances and objectives, increasing the challenges our forces would face.

These trends are ominous, to say the least, especially because it’s far easier to decline still further than to make rapid improvements that take substantial time, money and attention—all of which seem to be in short supply.

The 2015 Index of U.S. Military Strength makes it clear that unless we take a greater interest in the state of our security—now—we may be in for some serious trouble.