The Loophole That Could Liberate Maryland From Common Core Testing 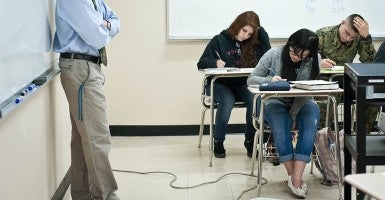 As millions of students across the nation begin taking Common Core-aligned standardized tests for the first time, Maryland finds itself in a unique position to opt-out.

A loophole discovered by a state lawmaker gives the governor the power to withdraw Maryland from tests created by Partnership for Assessment of Readiness for College and Careers (PARCC), which are designed to assess how well students are learning under the Common Core standards.

“It’s important for Maryland because the PARCC assessments and the consortium already—in its very short life—has shown clear evidence that it was poorly developed, poorly managed, and crammed down the throats of the states,” said David Vogt III, a Republican member of the state assembly.

Vogt recently discovered a hidden clause in a memorandum — signed by former Democratic Gov. Martin O’Malley in 2010 — that committed Maryland to PARCC testing.

The loophole grants the newly elected governor, Republican Larry Hogan, the authority to either recommit or remove Maryland from the PARCC exams within the first five months of holding office.

Vogt is rallying a coalition of parents, educators, and administrators to pressure Hogan to pull the state out of PARCC.

“[PARCC’s] not only unconstitutional, but it’s a hindrance to the education system of Maryland,” Vogt said. “Education was built to be a state-managed and operated function and the governor exercising his authority here will put it back in the state of Maryland’s hands.”

The timing of the discovery is significant, because Maryland, along with a number of other states, is officially administering the new Common Core-aligned tests for the very first time, despite protests that have sparked across the nation.

In New Mexico, two hashtags, #BarkAtThePARCC and #PARCCWalkOut, went viral on Twitter, encouraging students to “walk out” on the exams.

In New Jersey, technical problems caused some schools to delay the tests, which are taken on a computer. Thousands of students simply refused to take the tests.

“It took more time to set up the test than it did to take the test,” junior Emily Green of Cresskill, N.J., told CBS New York.

In Colorado, The Denver Post reported that of 100 students who tried to log on to take the computerized tests, only five were able to due to technical glitches, spurring criticism that states were inadequately prepared to test to the new standards.

“Full testing began this week with few technical issues and no broad student or parent protests,” he said. “More than 40,000 Maryland students are taking the assessment today.”

Still, the grassroots opt-out movement in Maryland is difficult to ignore.

Tony Piacente, the father of an 8th grader who goes to school in Mechanicsville, Md., told The Daily Signal that he’s been battling St. Mary’s County and the State Department of Education for over six weeks trying to refuse his son’s participation in PARCC.

“They are trying to bully me into submission,” he said. “I get contradictory statements from both places and they still have yet to provide me the law or regulation that states my child must participate in the PARCC to graduate.”

Piacente said he opposes PARCC because, “The prep time and test time takes away over 30 plus hours of quality instructional time for students, kids are tested enough in class, and it places undue stress and pressure on kids of all age groups.”

Maryland State Superintendent of Schools Lillian Lowery yesterday spoke out in support of the PARCC assessment, calling it “a tremendous opportunity to gain more insights than ever before into how our students are progressing, and identify where we can all do better.”

But Vogt believes he can garner enough momentum through grassroots organizations to pressure the governor to pull out of the tests.

“It’s fairly uniform across the board [that] everybody’s concerned about the testing problems,” he said. “I’ve had phone calls and letters and emails come in — from parents and teachers who are in the public school system, to members of local school boards across the state.”

Without the PARCC exams, teachers would still be required to follow the Common Core curriculum.

Common Core proponents argue that PARCC and similar assessments are the best way for the federal government to ensure that states are faithfully implementing the standards.

Maryland, along with 45 other states, adopted the Common Core standards in 2010 as a way to ensure that kids are college and career ready, and to track student success in a way that’s comparable state-by-state.

Critics say the exams are too rigorous and detract from local and state control of the classroom. They also argue that states were incentivized by the Obama administration to adopt Common Core and its affiliated exams with $4.35 billion in Race to the Top grants and waivers from the No Child Left Behind law.

Maryland received a four-year, $250 million federal grant for fully implementing the standards by the 2014-2015 academic year.

State lawmakers will formally challenge Common Core this week, when they consider a number of proposals that intend to slow down or halt the process of implementing the standards.

A spokeswoman for Hogan told The Daily Signal that the governor is still deciding what to do about the PARCC tests.

“The governor has major concerns about ‘one-size fits-all’ standards like Common Core and PARCC, and he will be exploring ways to improve or remove them during his term,” Erin Montgomery, the spokeswoman, said.