We Haven’t Had a True Free Enterprise System for Decades 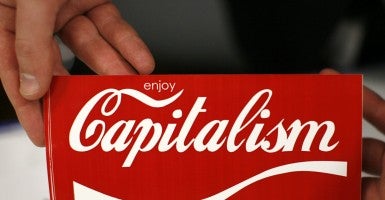 People who believe in the power of individual liberty and free enterprise have had a rough time lately. And with so many recent examples of government intrusion, it’s hard to feel good about the future of capitalism.

In the case of financial markets, the tide has never really turned in favor of free markets. At the federal level, the 2010 Dodd-Frank Act effectively enshrines as law the progressive movement’s paternalistic view of regulation. Under this view, it’s not enough to merely deter and punish fraud; the government also has to protect everyone from virtually everything that could go wrong.

Thankfully, there’s a ray of hope for everyone’s inner capitalist – a spirited defense of capitalism from Frank Keating, president of the American Bankers Association. In a recent Wall Street Journal interview, Keating argued it’s not the federal government’s business to dictate private companies’ salaries. According to Keating:

[I]f it’s private money, if it’s not FDIC-insured money, for example, if it’s private capital, private stockholders, whatever they pay or don’t pay is their business. This is a free enterprise capitalist system after all.

Now, if you’d like to remain in a state of capitalistic bliss, read no further in that interview. Please. Because the rest of Keating’s interview displays symptoms far more in keeping with the paternalistic approach to regulating financial markets.

This approach goes well beyond simply providing legal protections for property rights and against fraud. Instead, it defines exactly what people must consider high risk versus low risk, and it dictates which risky activities are acceptable for which people.

As a result, we end up with exactly what we have: a giant mess that hinders the formation and use of capital and subjects it to political whims.

The last part of Keating’s defense is dead wrong because we really don’t have a free enterprise capitalist system. We haven’t had one for decades.

To paraphrase financial journalist Jim Grant, what we have is much closer to some sort of smiley-faced socialism. Government doesn’t fully own the means of production, but it directs the daylights out of them. Especially in financial markets.

The 2010 Dodd-Frank Act is a great example of the ills that come with smiley-faced socialism.

By the end of 2014, federal financial regulators had finalized more than 11,000 pages of rules and regulations. But they had also missed more than 36 percent of the Act’s rule-making deadlines, and they hadn’t even bothered to propose more than 20 percent of the required rules.

Anyone paying attention to this rule-making process over the last few years can see that the process spawns crony capitalism. Regulators work with industry employees to craft the rules because they have to.

Employees have expertise regulators need to do their job, and vice versa. In a social sense, they end up working together. Nobody should be surprised that some of these people build symbiotic social relationships rather than antagonistic ones.

Our paternalistic system also lends itself nicely to cronyism because financial executives are very good at making basic economic calculations. They understand, for instance, that it is often more profitable to make a deal with the government rather than to outright oppose new regulations.

We shouldn’t be surprised that people with big money at risk are often happy to accept a bit more regulation for good press and more taxpayer backing.

For a great example, we can go right back to Keating’s interview.

Keating suggests it’s appropriate for regulators to focus on “the responsibilities” of corporate compensation committees and of employees that make financial decisions. He also argues that it is “reasonable for regulators to determine just how much of a banker’s pay can be deducted on taxes.”

This sort of rule dictates that shareholders’ after tax return, all else equal, must be lower.

This dangerous way of thinking opens up a slimy can of worms because it literally means that legitimate business expenses are no longer tax deductible.

How long before a whole industry – oil drilling, perhaps – finds that its business expenses are no longer deductible? Too far-fetched? Turns out that some policymakers have already proposed this idea for insurance and advertising expenses. Over time, this policy would make the statutory tax rate meaningless.

Apparently, Keating’s group is confident that this deal will stave off direct limits on executive pay. And perhaps it will. For now.

But beyond this short-term apparent victory, the free market suffers. As it has for years, especially in the financial sector. (Banks are a case-study unto themselves, but the problem goes well past the banking segment.)

The list goes on, and nearly all of these regulations are instituted in the name of protecting people from themselves even though this paternalistic approach has repeatedly failed in the past.

It condescendingly assumes a group of elites should tell everyone else what to do; it breeds cronyism, limits competition thus putting upward pressure on consumer prices, and it hinders capital formation.

If we want a free enterprise capitalist system, we need to go back to the drawing board. Let the government deter and punish fraud, but don’t let it dictate the size and structure of financial markets. Let investors invest and accept their own risks.

To his credit, Keating wants policies that “make sure the taxpayers are not burned even though your stockholders may be burned.” That’s a capital idea.