Amidst Conservative Backlash, House Pulls No Child Left Behind 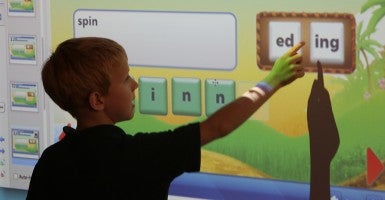 After failing to win the support of conservatives, Republicans have quietly withdrawn legislation that would update the No Child Left Behind law by scaling back Washington’s involvement in education.

The bill, called the Student Success Act, was strongly opposed by both conservatives and Democrats.

“Conservatives across the country had voiced concerns that the policy contained in this 620-page rewrite of [No Child Left Behind] did not limit Washington’s overreach into education,” said Lindsey Burke, The Heritage Foundation’s Will Skillman Fellow in Education.

Their voices, expressing concern that this proposal represents a missed opportunity to restore state and local control of education and empower parents, have been heard.

Conservatives opposed the Student Success Act because they feel it did not go far enough in reducing the federal government’s imprint in state and local education policy. Democrats argued it went too far.

>>> Read More: The Conservative Problem With No Child Left Behind

Conservatives’ biggest issue with the legislation is that it failed to offer states an option to completely opt out of the 80-some programs under the No Child Left Behind law, which was re-authorized and renamed (from the Elementary and Secondary Education Act) in 2001 under President George W. Bush.

“This proposal spends nearly as much as No Child Left Behind, is nearly as long in page length, and fails to give states an option to opt out of the law,” Burke said of the House proposal.

Instead, conservatives would like to see the Academic Partnerships Lead Us to Success (A-PLUS) amendment added to the No Child Left Behind rewrite.

The A-PLUS proposal would provide states that did not want to participate in No Child Left Behind a way out. Rep. Mark Walker, R-N.C., and Rep. Ron DeSantis, R-Fla., led the effort this week to pressure Republican leadership to include the 10-page A-PLUS proposal in the Student Success Act.

“I don’t view this as a win—a win would be bringing a bill to the House floor with a more open amendment process and passing smart, conservative education reform,” said Walker, adding:

I believe government is at its best and has higher accountability when it’s managed on the state and local levels. H.R. 5 has some good reforms but it should do more.

>>> Commentary: Student Success Act Does Not Repeal Common Core. States Must Do More.

Earlier this week, the Obama administration threatened to veto the Student Success Act without the A-PLUS amendment, calling it “devastating” for low-income families and students with disabilities. It is therefore unlikely that Obama would sign into law any No Child Left Behind update that includes A-PLUS.

Still, conservatives so far refuse to endorse any legislation that does not further their policy beliefs about education.

Republicans did not say when the House would consider another No Child Left Behind rewrite.