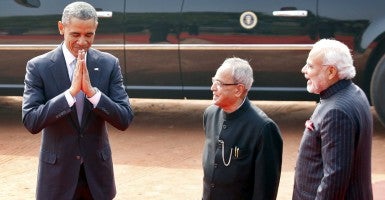 The issue of religious freedom has sparked heated debate in India in recent weeks, prompting the country’s prime minister to address the subject directly.

At an event celebrating Indian Catholics, Prime Minister Narendra Modi told the crowd that “My government will ensure that there is complete freedom of faith and that everyone has the undeniable right to retain or adopt the religion of his or her choice without coercion or undue influence.”

Modi’s announcement came three weeks after President Obama traveled to the South Asian country and discussed religious liberty, referencing the iconic Indian civil rights leader Mahatma Gandhi. The president spoke of his own personal faith, noting that people tried to malign him using religion “as if that were somehow a bad thing.”

A week later at the National Prayer Breakfast, Obama expanded on his push for religious tolerance in India.

“Michelle and I returned from India—an incredible, beautiful country, full of magnificent diversity —but a place where, in past years, religious faiths of all types have, on occasion, been targeted by other peoples of faith, simply due to their heritage and their beliefs—acts of intolerance that would have shocked [Gandhi], the person who helped to liberate that nation,” according to a transcript of the speech.

During the prayer breakfast, the Dalai Lama, who has been in exile in India, was seated next to Obama. The Dalai Lama’s appearance was viewed by observers as an example of India’s religious tolerance.

India has had it’s share of religious violence, however, most notably in 2002, when as a state leader, Modi failed to ease tensions between the Hindu majority and Muslim minority. One lawsuit accuses him of failing to adequately handle the violence, known as the Gujarat riots.

The controversy picked up again after Modi’s announcement. Accusing the prime minister of “pandering to secularists,” opposing politicians and critics used the hashtag #SecularModi on Twitter.

Modi becomes #SecularModi, Shiv Sena wants nightclubs.. Is the sun going to rise in the west from now on?

Modi has finally come of age on secularism. #SecularModi

Lisa Curtis, a senior fellow at The Heritage Foundation’s Davis Institute for National Security and Foreign Policy, who recently traveled to India spoke to The Daily Signal about the prime minister’s statement.

“Prime Minister Modi’s speech firmly condemning religious persecution and violence should reassure India’s religious minorities that the government will protect them. In the backdrop of a series of recent incidents of church vandalism in New Delhi, Modi’s statements demonstrate he understands the importance of speaking up for religious freedom,” she said.

Despite the controversy, some minority religious leaders agreed with the prime minister’s sentiments about religion. Imam Mukarram Ahmed of Fatehpuri Mosque in Old Delhi was one.

While he still harbors some doubts, Ahmed told the Washington Post that in the end, Modi “did the right thing.”