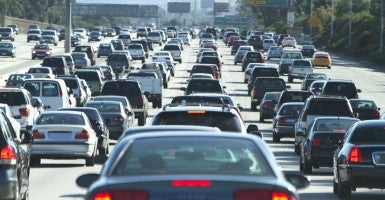 Predictably, President Barack Obama’s 2016 budget request calls for higher taxes to partially finance a $4-trillion spending tsunami. One of the more senseless tax hikes would fall on multinational businesses and is sought to pay for a transportation budget more lavish than necessary.

It’s baffling why Obama would propose this tax on businesses’ foreign income, both temporarily at 14 percent in 2016 and permanently at 19 percent after that. Politically, it pretty much kills the chances of working with Congress to achieve meaningful, growth-oriented corporate tax reform this year.

It’s also destructive, because the U.S. already has one of the worst corporate tax systems in the developed world. We are virtually the only developed nation that taxes its businesses’ foreign income.

To help American businesses compete more successfully in the global economy, Congress and the president should lower the corporate tax rate and transition to a territorial system — not tax foreign earnings. Equally destructive is Obama’s ornery insistence on a centralized U.S. transportation system propped up by federal spending. His request for a $478 billion public works package — including subsidies for passenger rail, urban mass transit, and streetcars —would cement this approach.

This Washington-centric model prioritizes an inept bureaucracy over a capable private sector when it comes to controlling how money is generated and spent on surface transportation activities.

Whether for pipelines, factories, refineries, cell towers, or freight rail, the private sector has demonstrated its prowess in prudent investment and proper management. Private infrastructure spending is four times larger than all levels of government infrastructure spending put together. Consumers get cell service, goods delivered, and energy transported when they need them and at a competitive cost. Even when the private sector fails, as Ford did with the now ill-famed Edsel — it learns from its mistakes and moves on to something that consumers want.

Meanwhile, year after year, consumers of roads, bridges, and other transportation find themselves stuck in traffic or waiting on a delayed train. Every year, Washington shortchanges motorists by showering billions of dollars — 25 percent or more — of the gas tax user fees they pay, on transit, rail, and other “smart-growth” interest groups. Those diversions are unfair, and they represent the worst kind of mismanagement: favoritism.

The feds, who oversee how money in the Highway Trust Fund is funneled back to the states, attach plenty of strings along the way. They require state officials to spend highway-user fees on myriad low-priority activities, such as recreational bicycle and walking trails. They require states to pay high union wages on effectively all projects that use federal money. And they restrict states’ options for paying for transportation projects. States, cities, and towns have urgent matters to address — traffic congestion and bridge maintenance for starters — but waste and mismanagement in Washington stand in the way.

Having seen Obama’s budget, Congress should do an about-face.

Cut, don’t hike, taxes on American businesses. Cut, don’t fuel, our bloated federal government. Show some fiscal discipline. Move to a decentralized transportation system that works for consumers and spends money according to their preferences, not according to the wishes of special interests in Washington.

Originally appeared in The Detroit News.