Should Workers Need a Union’s Permission to Get a Raise? 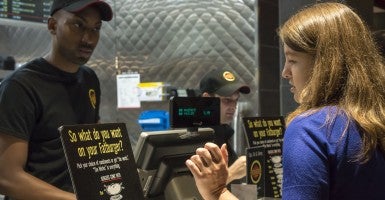 What happens to pay when companies unionize? A new study by a Massachusetts Institute of Technology-trained economist comes to a surprising conclusion: Wages fall.

Dr. Brigham Frandsen compared companies whose workers narrowly voted to unionize with those whose employees voted narrowly to stay non-union. He found that average wages at the narrowly unionized companies fell 2-4 percent relative to those that narrowly rejected unionization.

Unions attempt to raise wages. Why would unionizing cause them to fall? Frandsen found a straightforward explanation. Average wages did not change for workers who stayed with their company. But many of the most productive—and highly paid—workers quit after their companies unionized and took jobs with non-union firms. Their replacements tended to have lower wages, so the exodus of talent pulled down the average.

Top employees leave because union contracts set pay ceilings. Unionized companies may not pay individual workers more than the union rate without the union’s permission, and unions rarely give that permission. They typically insist on seniority systems that award raises based solely on time served, not individual effort. (Recently, unions successfully fought in court to rescind performance-based pay increases a Pennsylvania grocery store had given to two dozen employees).

Unionizing typically reduces the pay of high-performing workers. No matter how hard they work, they cannot earn more than the seniority system permits. Consequently, they choose to leave and take jobs at non-union companies.

The RAISE Act would allow the 6.9 million union members covered by the National Labor Relations Act to accept individual pay increases without permission from their union. The union contract would still set a pay floor, but it no longer could prevent employers from paying more than the union rate.

This would mean higher pay for union members across the country. Economists have found that workers’ pay rises by an average of 6-10 percent after companies introduce performance-based pay. Employees work harder and earn more, and the company has higher profits. Everyone wins.

The RAISE Act also would mean more job security for union members. After all, companies lose when their best performing employees leave. Indeed, Frandsen in the same study found evidence suggesting that within seven years of unionizing, companies are 10 percentage points more likely to go under than had they stayed non-union.

Enabling unions to turn down raises on their members’ behalf hurts workers and companies. Fortunately, Congress may soon put an end to this practice.