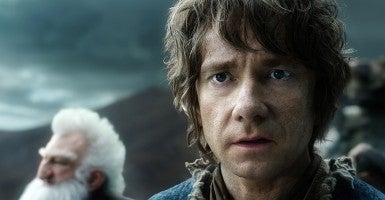 The 9-year-old was suspended from his school for pretending to be Bilbo Baggins. (Photo: Tass/TASS/ZUMA Wire)

It is hard to imagine that when J.R.R. Tolkien published “The Hobbit” he expected school officials would suspend children for imaginatively recreating scenes from the book. But that is exactly what happened to Aiden Steward, a 9-year-old boy from Kermit, Texas.

After watching the movie “The Hobbit: The Battle of Five Armies” one weekend with his family, Aiden brought a toy ring to school and told a classmate that he would make him disappear, much like Bilbo Baggins did in the story.

School officials, however, considered Aiden’s playful statement to be a “terroristic threat” and suspended the young boy from school, under the premise that no threat would be tolerated, whether real or imagined.

As implausible as that explanation sounds, the school stood by their decision and offered no comment. “All student stuff is confidential,” stated Principal Roxanne Greer.

Jason Steward, the young boy’s father, noted in an email, “I assure you my son lacks the magical powers necessary to threaten his friend’s existence. If he did, I’m sure he’d bring him right back.”

Here’s a question for Principal Greer and the Kermit Elementary school officials: If Aiden truly made a terroristic threat, why did they fail to inform the police? If a dangerous young boy with a magical ring is causing local children to vanish into thin air, shouldn’t the FBI be notified? Homeland Security? Gandalf?

In all seriousness, incidents like this showcase the detrimental—and borderline insane—measures public officials take to address student misbehavior. Attempts to ensure order in the classroom often result in suspension, or even worse, criminal charges.

It sure is a dangerous business going out your (school) door.

If Aiden Steward caused a disturbance in the class or engaged in offensive behavior, then disciplinary steps should be taken. Teachers have a right to demand respectful behavior from their students in the classroom. But classifying his playful words as a “terroristic threat” ignores valuable context and elevates the punishment far beyond an appropriate level.

Treating imaginative expression as harmful statements would suspend an entire generation of Americans who acted out their favorite scenes from Superman, Batman, Power Rangers, and other fictional stories. Children should be allowed the freedom to exercise their creativity in a healthy way without fear of suspension or arrest.

The school district should erase this incident from Aiden’s record and apologize to him and his parents for treating a 9-year-old like he was Don Corleone. Moreover, perhaps the school should hire a new principal, one who knows what it is like to be a 9-year-old at some point.