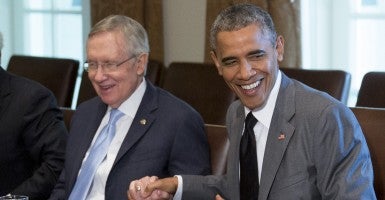 That’s one way to see it.

A more accurate headline would have been: “Senate Democrats block debate over legislation funding the Department of Homeland Security.”

The latter is exactly what all 44 Senate Democrats (and two Independents) did Tuesday and again Wednesday when they voted against “the motion to proceed” on a House bill that would fully fund the Department of Homeland Security once its current short-term budget runs out on Feb. 27.

Democrats have clearly decided their only hope of winning this battle is to frame the GOP as the obstructionist party as long as the media will let them get away with it. And so far they have.

In reality, Democrats don’t want to discuss the bill, consider the bill, debate the bill or vote on the bill because in addition to funding Homeland Security, the House legislation also “defunds” President Obama’s executive “go it alone” actions on immigration.

There is absolutely no disagreement about funding the day-to-day operations of Homeland Security. The House bill does that.

The disagreement is over whether to fund immigration directives from the White House that were never debated or voted on by Congress—one in 2012 that called for delaying the deportation of millions of illegal immigrants and another late last year, conveniently after the mid-term election, that called for giving worker permits and Social Security cards to millions more here illegally.

Democrats don’t want to discuss the bill, consider the bill, debate the bill or vote on the bill.

It’s not just a majority of Republicans in Congress who oppose Obama’s actions. Several sitting senators of the president’s own party have said he wrongly bypassed Congress, and 26 states—that’s right, more than half the union—have filed a lawsuit against his amnesty plans.

One would think that when the president takes actions that is considered by more than just a few to be unconstitutional and that though done without their approval requires lawmakers to give a government agency, in this case Homeland Security, the dollars to implement those questionable actions, Congress would want to at the very least discuss and debate the matter.

Yet when it came down to it, a number of Democrats who had publicly questioned Obama’s moves and who all represent states that are part of the lawsuit, apparently decided that protecting Obama’s agenda was more important than funding Homeland Security and more important than any concerns they previously had about the legitimacy of his actions.

A Gallup poll taken shortly after Obama announced his plan to issue worker permits to millions of illegal immigrants last fall found that 51 percent of Americans disapproved while 41 percent approved.

Republicans should take note of that last finding. In addition to stopping Obama’s executive actions on immigration being the right policy, such numbers suggest it could also be good politics.

That means Republicans must be willing to wage this battle in the public square and not just behind closed doors on Capitol Hill, which is exactly where Democrats would like to keep it.