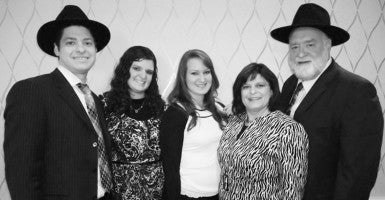 A third-generation veteran says the government is choking him from his livelihood, blocking his access to bank accounts and forcing him to pay exorbitant fees for basic financial services.

“I’m an American, and when the government does something like this to its own citizens, it has to be stopped,” said Andy Kramer, owner of Discount Check Casher of Georgia. Kramer supports his wife, who is a public school teacher, and three children by running a small check-cashing service in Savannah, Ga.

But over the past year, he has struggled to make ends meet, finding himself subject to the Justice Department’s covert program Operation Choke Point.

Kramer is aware that his industry, check cashing, is often criticized for charging exorbitant fees and thereby subject to complex regulations.

“I’m the poster boy for compliance,” he said. “I don’t mind going through all the hoops—it’s hard, it’s expensive, but I do it.”

In the early 2000s, Kramer said national banks like SunTrust, Wells Fargo and Bank of America went on a campaign to eliminate money-service businesses from their customer base.

But because local banks still supported his service, decisions made by “the big boys” never posed a significant threat.

The program, Kramer believes, caused a series of local banks to drop his accounts, putting Discount Check Casher of Georgia and its nine full-time employees in jeopardy. His banker told him that although he was a “great account” and an “ideal customer,” the bank had made a blanket decision that they could no longer do business with check cashers.

“I’m an American, and when the government does something like this to its own citizens, it has to be stopped,” says Andy Kramer

Sensing a prejudice against his industry, Kramer dramatically changed the way he did business.

Instead of bringing checks directly to the bank for deposit, Kramer switched to a remote deposit system, where a third party would process his customers’ checks and transfer the money—basically in cash form—to the bank.

The idea is to transfer risk from the bank to a third party.

“The bank has no risk at all—there’s no check,” said Kramer.

But that wasn’t enough.

Over the course of the next seven months, two more banks—Coastal Bank and United Community Bank, both located in Savannah—dropped him as a customer.

In 2012, the Justice Department set out on an ambitious mission to “reduce dramatically mass market consumer fraud” by limiting fraudsters’ ability to access bank accounts and other financial services.

They would do so by utilizing the broad scope of President Obama’s Financial Fraud Enforcement Task Force to pressure banks into scrutinizing their customer base.

Whether intentional or not, the initiative resulted in the termination of bank accounts in a range of legal and legitimate industries.

Like Kramer, business owners across America found themselves blocked from basic financial services.

Of the nine or more government agencies involved in the execution of Operation Choke Point, the Federal Deposit Insurance Corp. has taken the most heat.

The agency has been accused of discouraging banks from doing business with range of legal and legitimate industries.

Evidence points to a 2011 list created by the FDIC, which was adopted into Operation Choke Point. Check cashers weren’t specifically called out in the FDIC’s “high risk” list (although some might classify the business as a “money transfer network”), but the guidance set a vague precedent for the termination of accounts from a broad range of industries, especially those subject to the Bank Secrecy Act.

He told The Daily Signal, “The example of Kramer shows that the list was only the start and that many more industries than were included on that list have become victims of this program.”

Since coming under pressure from Republicans in Congress, the FDIC walked back its involvement in Operation Choke Point, taking dramatic steps to reverse its policies in targeting legal and legitimate industries that are unpopular within the Obama administration.

But industry insiders’ say Choke Point is far from over, and the FDIC’s policy change is insufficient to protect business owners.

“The FDIC’s latest move is as a stunning admission that the government targeted legal and lawful businesses for undue regulatory scrutiny,” said Jamie Fulmer, senior vice president of public affairs for Advance America, Cash Advance. However, he said:

The FDIC gave little hint at whether it would rectify the damage done to the untold number of regulated businesses who lost crucial banking relationships or whether officials with personal biases against legal businesses used by millions will be held accountable.

The U.S. Consumer Coalition’s Wise said the FDIC’s latest move was a political stunt to “quell the public scrutiny of this program.” He added:

We know this because the same week that the [Financial Institution Letter] came out from the FDIC, the Consumer Financial Protection Bureau put out a warning to banks threatening them not to disclose anything about the examination process. This warning amounts to witness intimidation and witness tampering and demonstrates that Operation Choke Point is nowhere close to being over. Those claiming victory right now are woefully misinformed.

Despite the significance of the FDIC’s action, questions remain.

“It’s almost broke me,” Kramer said of Operation Choke Point. “When I found out [about the program], I said, ‘Why would they do this to me?’”

Kramer has since found a new bank that claims it doesn’t discriminate against his business, but has no way of knowing whether he’ll be dropped again.

To protect that bank, Kramer asked to keep its name anonymous.

After a few months of good service, Kramer asked his banker, “Why are you the only bank that treats me like a businessman?”

Because the president of our bank believes that in order to be a community bank, you’ve got to service the needs of the community. And there’s certainly a need for check cashing in this community.

As grateful as he is, the saga has taken its toll on both Kramer and his employees.

“Instead of facing normal business problems, upon waking each morning it is a question of will we still have a bank to do business with or will I have to shut my doors,” he said.

One of his employees, Arnie Goldstein, understands the threat. He said: “If the bank we have now decides to do this again, we have no place to go. It means padlocking the door.”