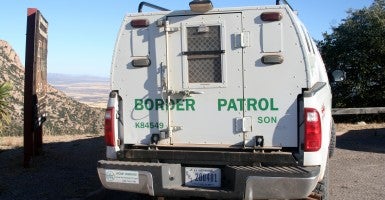 A union leader for U.S. Border Patrol agents spoke out today to voice concern about the political haggling over funding for the Department of Homeland Security.

Shawn Moran, vice president for the National Border Patrol Council, says the congressional showdown over President Obama’s executive actions and Homeland Security funding shows that “those in D.C. aren’t concerned with the real-world impact of a shutdown.”

“We’re in the middle of political football,” Moran said in an interview with The Daily Signal. “You want to be able to do your job, but things like this make it more difficult.”

Many conservatives in Congress say they will only approve funding for Homeland Security if the bill includes measures to block President Obama’s executive actions on immigration. The House passed a Homeland Security funding bill last month that includes amendments to undo major portions of Obama’s immigration policies, including his recent executive actions and an earlier program that allowed immigrants who entered the country illegally as children—a group known as Dreamers—to stay.

The bill faces an uncertain future in the Senate, which will vote on the legislation today. At least seven Democrats have spoken out with concerns about Obama’s executive actions. However, it’s unclear if the GOP will be able to attract any for the 60 votes needed to overcome a filibuster. Republicans control 54 seats.

Democrats have called for the passage of a “clean” appropriations bill free of amendments related to Obama’s immigration policies.

Obama has vowed to veto any bill that includes measures to stop his actions. And today, speaking at the Homeland Security headquarters, Obama warned Congress not to play politics with the agency’s funding.

“The men and women of the America’s homeland security apparatus do important work to protect us, and Republicans and Democrats in Congress should not be playing politics with that,” Obama said. “We need to fund the department. Pure and simple.” Obama’s conservative critics argue that if the White House is unwilling to make changes to its immigration policies, the president should be blamed if Homeland Security were to shut down.

David Inserra, a homeland security expert at The Heritage Foundation, acknowledged a shutdown was “not the best situation for security, but it’s not the disaster people make it out to be.”

“Obviously, we want people to be paid and you can’t improve border security without funding,” Inserra said. “But why should conservatives get blamed? The president instigated this. He should have put border security over amnesty.”

Regardless of who’s to blame, Moran is worried about how the funding fight affects the morale and well-being of the 17,000 Border Patrol agents his union represents.

Moran says that Border Patrol agents continued to work during the government shutdown in 2013 because their service is considered “essential,” but they didn’t receive paychecks during the Washington standoff.

“We don’t want our border left unguarded,” Moran said. “We want people out there doing their job.” The White House released a statement today saying more than 40,000 border patrol agents would work without pay under a shutdown, along with 13,000 at Immigration and Customs Enforcement, 40,000 in the Coast Guard, 50,000 at the Transportation Security Administration and 4,000 in the Secret Service.

Though Moran’s agents did eventually get paid after the 16-day shutdown was resolved in October 2013, he said that working without pay—and worrying that such service will be required again—proves to be distracting and tiresome.

“It’s disruptive,” Moran said. “It does have a huge impact on how you go about your day-to-day life. It’s the inability to plan financially as you don’t know when the paychecks will come again.”

Moran insists his agents’ collective pride won’t let them give any less in doing their job, no matter the surrounding politics. But he worries how funding scares like this one will impact Border Patrol’s ability to attract new agents.

“We want to make sure we’re out there able to do our job,” Moran said. “We want to be funded. We don’t want politics to play into how we secure the border.”