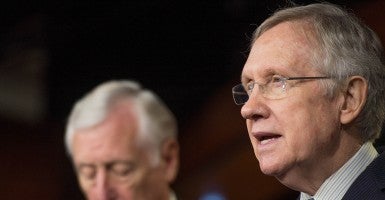 In the midst of his recovery from a serious accident at his home in Nevada, Sen. Harry Reid (D-Nev.) has gotten some more bad news: the Ninth Circuit Court of Appeals has upheld the felony conviction of Harvey Whittemore, a big financial supporter of the senator.

According to the Ninth Circuit’s opinion, which was released on Jan. 26, Whittemore is “a prominent attorney, developer and lobbyist who has long been active in Nevada politics and political fundraising.” In 2007, he was the chairman of “a holding company with significant interests in golf courses, land development, oil and gas properties, and dairy operations.” The Federal Election Commission website records him as having made tens of thousands of dollars in political contributions to various candidates as well as party organizations such as the Democratic National Committee and the Democratic Senatorial Campaign Committee.

According to the court opinion, in Feb. 2007 after a personal meeting with Reid, Whittemore promised to raise $150,000 for Reid before the upcoming March 31 campaign finance filing deadline. When Reid’s campaign had not received any of the promised funds by late March, Reid’s fundraiser Jake Perry “twice followed up with Whittemore.” On March 27, 2007, the “day of the second follow-up call, Whittemore transferred a total of $145,000 to seventeen relatives and employees through wire transfers and checks.” Individuals who were not married received $5,000 and married couples received $10,000.

Every relative and employee then made a maximum contribution to Reid’s campaign, which at the time was $4,600, “most within one day of receiving the money.” Many of them testified at trial that “they would not or could not have made such large contributions absent the transfers from Whittemore.”

Whittemore told his relatives and employees that these payments were “gifts” or “bonuses,” but he simultaneously “encouraged them to make contributions to Sen. Reid’s campaign, sometimes explicitly stating that the funds were intended to cover the cost of the contribution.” Many of the contribution checks were sent by Federal Express to Jake Perry by Whittemore’s assistant with a spreadsheet identifying 33 donors, thirteen of whom were employees of Whittemore’s holding company.

Whittemore was convicted by a jury of making excessive campaign contributions and violating the federal campaign finance law prohibition on conduit contributions, which is when you make a contribution in the name of another person. He was sentenced to 24 months in prison by federal district court Judge Larry Hicks and began serving his sentence at the Lompoc federal prison facility in California in August of last year.

Whittemore’s attorney raised some pretty creative defenses to his prosecution before the Ninth Circuit, none of which worked. For example, he argued that an unconditional gift of funds cannot violate federal law once the funds have become the property of the donors under Nevada law. Since the money Whittemore transferred to his relatives and employees became their own money and “because the transfers were not conditioned upon the making of campaign contributions or otherwise, the giftees’ subsequent campaign contributions could not trigger a violation” of federal law. But the Ninth Circuit concluded that Whittemore’s arguments had no merit and were “not supported by law.”

Whittemore also claimed that the maximum federal campaign contribution limit of $4,600 violated his First Amendment rights to free speech and association. However, the Ninth Circuit said that argument had been foreclosed by the U.S. Supreme Court in Buckley v. Valeo (1976), the seminal case on campaign finance law, which held that “the appearance of corruption stemming from public awareness of the opportunities for abuse inherent in a regime of large individual financial contributions” was “a constitutionally sufficient justification” for the individual federal contribution limit.

Given his financial status, Whittemore certainly has the funds to file a petition with the Supreme Court requesting review of his conviction. But the Court is not likely to take the case given the justices’ long approval of the federal contribution limit and the ban on conduit contributions intended to prevent circumvention of that limit.

So at least one of Reid’s big campaign fundraisers is likely to be out of commission for quite a while.