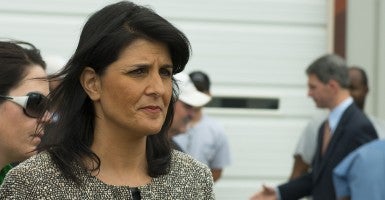 The governor of South Carolina has proposed lowering the state’s income tax rate from 7 percent to 5 percent, accompanied by a 10 cent hike in the state’s gas tax.

In her annual State of the State address on Wednesday, Gov. Nikki Haley, R-S.C., said the state’s income tax puts it at a competitive “disadvantage.”

“In order to keep the ball rolling in our economy, we must bring down our income tax,” Haley said.

She acknowledged that despite her desire to cut the income tax rate, South Carolina needs to invest in its infrastructure. Greenville Online reports that the South Carolina Department of Transportation “has rated almost half the state’s primary and secondary roads in poor condition.”

Haley proposed doing “three things at once that will be a win-win-win for South Carolina.”

The first would be lowering the income tax over the next decade, which amounts to a 30 percent reduction. The lower 5 percent rate would take South Carolina’s nationwide income tax ranking from 38th to 13th.

While the income tax rate would go down, the gas tax would increase by 10 cents over the next three years. Haley said that the revenue generated from this tax will go “entirely toward improving our roads.”

The governor said that “when coupled with the 30 percent income tax cut, it still represents one of the largest tax cuts in South Carolina history.”

“Simply shipping more money into the current bureaucracy would be like blasting water through a leaky hose,” she said. “Some of it would reach the right destination, but too much of it would end up in a mess on the ground. I won’t do it.”

“Gov. Haley continues to show why she’s a national conservative leader,” DeMint told The Daily Signal. “She deserves credit for promoting tax reform that provides opportunity for all South Carolinians, and rejecting favoritism by taking on the transportation bureaucracy. Reforms like this make our state more economically competitive with our neighbors. It’s a great step forward for South Carolina.”

In order for the plan to become law, Haley laid out this stipulation:

This is a three-part package deal. In order to get my signature on any gas tax increase, we need to restructure the DOT, and we need to cut our state income tax. If we do all of those things, we will have better roads and a stronger economic engine for our people.

State Sen. Gerald Malloy, D-Darlington, told The State that Haley’s conditional willingness to raise gas taxes is “very challenging.” He said, “At least we have part of a plan.”