The Surprising Proposals in Obama’s State of the Union 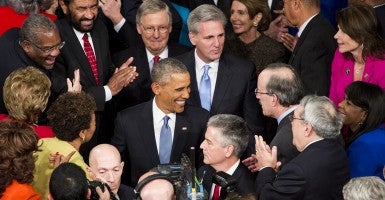 President Barack Obama greets members of Congress as he arrives in the House chamber in the U.S. Capitol to deliver his State of the Union address on Tuesday, Jan. 20, 2015. (Photo: Bill Clark/CQ Roll Call)

President Obama delivered his sixth State of the Union address tonight, outlining a number of domestic policy proposals and warning Republicans he would strike down any legislation that repeals Obamacare and rolls back his immigration policies.

Obama entered the House chamber at 9:06 p.m. and slowly made his way up the aisle, shaking hands with members of Congress who angled for an aisle seat, Supreme Court justices and Cabinet secretaries.

After arriving at the dais and greeting Vice President Joe Biden and House Speaker John Boehner, who sat behind him, the president began his 6,493-word address at 9:11 p.m. and finished speaking at 10:12 p.m.

“At this moment—with a growing economy, shrinking deficits, bustling industry, and booming energy production—we have risen from recession freer to write our own future than any other nation on Earth,” the president said. “It’s now up to us to choose who we want to be over the next 15 years, and for decades to come.”

In his opening remarks, Obama called 2014 as a “breakthrough year” for America and said the economy has grown at the “fastest pace since 1999.”

Facing a Republican-controlled Congress for the first time in eight years, the president did not mince words in threatening to veto any legislation that repeals Obamacare, rolls back the reforms implemented through Dodd-Frank and repeals his immigration policies.

“And if a bill comes to my desk that tries to do any of these things, it will earn my veto,” Obama said.

The president did encourage members of Congress to work together.

“I’ve served in Congress with many of you. I know many of you well. There are a lot of good people here, on both sides of the aisle,” Obama said. “And many of you have told me that this isn’t what you signed up for—arguing past each other on cable shows, the constant fundraising, always looking over your shoulder at how the base will react to every decision.”

Here’s a rundown of the policies the president discussed during his sixth State of the Union address.

What We Knew Obama Was Going to Say

In the weeks leading up to the State of the Union, the president embarked on a nationwide tour to build momentum. The “spoilers” included executive actions the president plans to take during his seventh year in office and legislative proposals he hopes to see the 114th Congress address.

As he revealed over the last two weeks, Obama tonight spoke about his plans to address higher education, the housing market, access to the Internet, cybersecurity, tax reform and sick leave for working Americans. The president’s proposals include:

With Republicans in control of Congress, it’s unlikely some of the president’s proposals will be implemented without resistance. However, GOP lawmakers hope to work with the president on issues including tax reform.

What We Learned Tonight

A minimum wage hike was a cornerstone of the president’s State of the Union address last year. However, Congress did not act. Obama revisited the proposal during his speech this year and emboldened lawmakers to pass legislation requiring women to be paid the same as men.

“And to everyone in this Congress who still refuses to raise his minimum wage, I say this: If you truly believe you could work full-time and support a family on less than $15,000 a year, go try it,” Obama said, “If not, vote to give millions of the hardest-working people in America a raise.”

Following last year’s emergence of ISIS, the brutal terrorist group also known as the Islamic State, the president said he was committed to “degrading the destroying” the terrorist group.

>>> Commentary: What Obama Got Right and Wrong in the State of the Union

In his address tonight, Obama called on Congress to authorize the use of force against ISIS. Last year, Congress authorized funding to help train and equip moderate Syrian rebels in the fight against ISIS.

The president tonight announced plans to launch a new initiative aimed for a new investment in data-driven medicine. Precision medicine, Obama said, would help to cure diseases including cancer and diabetes.

Newly elected Sen. Joni Ernst of Iowa delivered the Republican response to the State of the Union. In her response, Ernst reaffirmed the GOP’s commitment to passing the Keystone XL pipeline, simplifying the tax code and repealing Obamacare despite the president’s veto threats.

“Congress is back to work on your behalf, ready to make Washington focus on your concerns again,” the Iowa Republican said.

Ernst called on the president to work with Congress to “get Washington working again” and compromise on policies to create jobs and get rid of loopholes in the tax code.

“There’s a lot we can achieve if we work together,” she said.