Obama Schooled on Constitution by His Former Law Professor 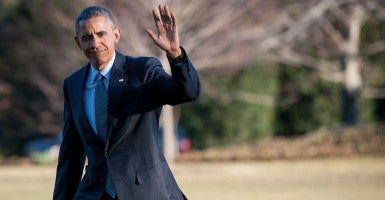 President Obama has defended his knowledge and commitment to the Constitution by reminding Americans he used to teach constitutional law courses. When it comes to Obama’s Clean Power Plan, one of his former law professors disagrees.

Laurence Tribe joins the long list of individuals, organizations, and local and state governments opposing the Clean Power Plan. Under the Clean Power Plan, the EPA is attempting to finalize regulations that would require states to meet individual targets to cut CO2 emissions, essentially eliminating the use of coal as an affordable, reliable energy source that provides nearly 40 percent of America’s electricity. Tribe, a Harvard law professor and “liberal legal icon,” had not been shy about his reasons in the past and testified on them before the House Energy and Power Subcommittee on Tuesday.

There’s a long (and quite dirty) laundry list of reasons Obama’s Clean Power Plan is a bad deal for Americans, which The Heritage Foundation and many others have detailed. To name a few, the plan will have almost zero impact on global temperatures, even though the plan is billed as a global warming initiative. It guts energy diversity by eliminating coal and replacing it with natural gas, which is as foolish as staking your nest egg on one kind of investment.

It threatens electric reliability and forces Americans to pay more for less power. And it creates the need for massive federal and state bureaucracies to manage the plan—providing ample opportunity for businesses to lobby for special protection and governments ample opportunity to make some money. No matter how states ultimately construct the plan, Americans will pay.

And as Tribe aptly puts it, the Clean Power Plan burns the Constitution.

Tribe’s entire testimony is well worth the read for anyone regardless of what they believe about global warming. His arguments having nothing to do with the “pros and cons” of the EPA’s response to global warming but with the rule of law and the “novel course of action” EPA has chosen to force through the Clean Power Plan. Here are a few notable excerpts from Tribe’s testimony Tuesday:

If it has not already, Tribe’s testimony should remind Congress that it is a coequal branch with the executive and not powerless against the EPA’s overreach. Tribe concluded that regardless of where an individual stands on global warming, the Clean Power Plan is not the way forward. In other words, the ends do not justify the means if the means take the very foundation of American government and democracy as a casualty. That’s something any freedom-loving member of Congress should be able to get behind.