First Boko Haram Kidnaps Little Girls, Now They Use Them as Suicide Bombers 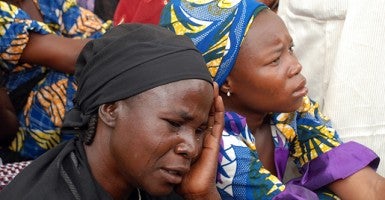 Northeastern Nigeria continues to be rocked by terrorist attacks, and the lead-up to next month’s elections is complicating an already volatile situation.

In a region that has become defined by gruesome terrorist attacks, Boko Haram—the group responsible for the kidnapping of more than 250 schoolgirls in 2014 and the attack on the UN headquarters in Abuja, the capital of Nigeria, in 2011—is only getting stronger.

Already, 2015 already is shaping up to be another bloody year. On Jan. 3, Boko Haram carried out a devastating assault on two Nigerian border towns– Baga and Doro Gowon in Borno State. Last weekend, Boko Haram detonated twin bombs on two young girls in Yorbe state and detonated another bomb on a 10-year-old girl in a busy market in Maiduguri, the capital of Borno state.

These “suicide-style” bombing attacks appear to be the youngest and most disturbing suicide bombings Boko Haram has carried out to date. Boko Haram also attacked soldiers in neighboring Cameroon in a cross-border skirmish. Cameroon has become the terrorist group’s second front in the region-wide insurgency to create an Islamic caliphate.

These recent attacks marked the implementation of a new set of ruthless tactics. Some put the death toll of the Jan. 3 attack in Baga as high as 2,000, but the government of Nigeria claims 150 people died. The actual number probably is somewhere between 200 and 500 deaths, a significant figure nonetheless.

Satellite images indicate complete destruction of Baga. Many reports have failed to account for the 3,000 -7,000 people that fled Baga for neighboring Chad. The Nigerian government has been accused of underreporting the death toll to downplay the insurgency in the North and maintain state legitimacy. A screengrab taken from a video purportedly from Islamist group Boko Haram released on Youtube on May 1, 2012 shows a man holding an AK-47 assault rifle. (Photo: YouTube)

Opposition figures are using the occasion to highlight the inability of Goodluck Jonathan’s administration to counter Boko Haram and provide security to the civilians in the North in the run-up to the national elections next month.

These recent attacks—along with the countless number of attacks the group has committed since the insurgency began in 2009—demonstrate that Boko Haram remains unchecked by either Nigerian or regional security forces as it continues to destabilize Africa’s largest economy and most populous nation. The Washington Post’s editorial board recently wrote that Boko Haram is “a complex terrorism threat comparable to the Islamic State…”

Given that Boko Haram controls a geographic area roughly the size of Maryland, the group no longer needs to operate underground. It can roam and maim as it wishes. And with government security forces often fleeing the very areas they are assigned to protect in advance of Boko Haram attacks, the territorial pickings are only becoming easier.

As Nigeria heads into one of the country’s most hotly contested national election seasons, both the incumbent President Goodluck Jonathan of the People’s Democratic Party and his opponent, Muhammadu Buhari of the All Progressives Congress, must remain committed to the country’s democratic process and commit to respecting the will of the Nigerian people if the electoral process is deemed free, fair and credible.

Boko Haram’s pursuit of an Islamic Caliphate is fundamentally at odds with a secular and democratic Nigeria. Every effort must be made to ensure all Nigerians can voice their opinion safely through the ballot box. Next month’s election could be the Achilles heel of Nigeria’s nascent democracy given Boko Haram’s proven ability to terrorize and instill fear in Nigeria and the wider region.

Ultimately Nigeria’s president, regardless of who wins, needs to provide leadership for the people, address the military’s internal challenges and build trust with local communities in order to contain and ultimately counter Islamist terrorism.