Averting the Next Fiscal Train Wreck 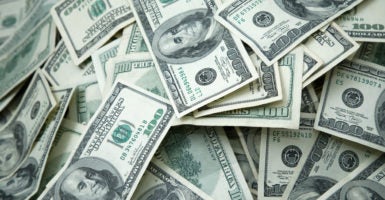 Car accidents are relatively common occurrences. Train wrecks are a little more out of the ordinary, to be sure.

One would be hard-pressed, however, to find many examples of a 15-lane pileup of 435 cars, 100 semi-trucks, three trains, and a small army of app-rent scooters strangling the center of the capital of the United States of America. Except, of course, in the federal budget.

Year after year, the federal government passes spending bills so riddled with wasteful spending, crony handouts, and thoughtless debt accumulation that it’s pretty much like a massive car crash: so awful to watch that you can’t even look away.

Congress is once again considering a massive spending increase that could end up being a near-total fiscal wreck, dubbed a “caps deal.”

It’s long past time for Congress to take a serious and sober look at America’s debt addiction and hit the brakes on out-of-control spending to avoid further deficit disasters.

The Heritage Foundation’s “Blueprint for Balance” chapter titled “The Fiscal Outlook” explains what exactly a fiscal catastrophe looks like, and what consequences are in store for all of us involved.

With the gross national debt in excess of $22 trillion—nearly 105% of gross domestic product—and mandatory spending like interest on previous debt, Social Security, Medicare, and Medicaid consuming 72% of current tax revenue, it’s easy to think that America’s fiscal woes have reached their worst point.

But that’s not true. Our debt problems are about to get much worse.

Looking at projections by the Congressional Budget Office—Congress’ official federal scorekeeper—one sees that the federal budget is on a rapid collision course with out-of-control deficits. By 2025, the mere interest payments on the national debt are set to eclipse defense spending. For a household, this would be the equivalent of incurring credit card bills every month that are the same size as their mortgage payments.

Meanwhile, mandatory and entitlement programs are accelerating on auto-pilot, on course to consume the entirety of government revenue in just over 20 years. This would mean that all spending set by Congress—defense, education, welfare, infrastructure, foreign aid, tax expenditures, and national security—would need to be funded solely by deficits, or Congress would need to raise taxes significantly.

Yet it is not merely a bad outlook by the numbers. It’s one thing to see the deficit problem as a current budgetary catastrophe, but it’s another to see it as a roadblock to future success.

As noted by economists at the Mercatus Center and others at the International Monetary Fund, high national debt can seriously hamper a country’s economic growth, with creeping effects that result in a sudden and unpredictable crisis. An increase in public debt beyond a certain sustainable threshold is associated with depressed economic growth, with effects worsening when researchers factor in high private debt.

However, higher debt also makes the U.S. a riskier buy for bond markets, and interest rates might eventually soar if investors become more wary of the federal government’s promise to service the debt. Left on the current trajectory, high debt could very well threaten the ability of the American people to sit in the driver’s seat of our economy.

The task of steering the federal government toward a sound and sustainable budget is possible only when one understands what exactly is wrong with the current budget, and the problems it presents for America’s future.

The Heritage Foundation’s “Blueprint for Balance” offers a glimpse of the disaster-ridden road to the future paved by fiscally reckless legislation and budgetary abdication, but it also provides a panoramic view of the expressway of prosperity that limited and responsible American government could enable.

Indeed, with responsible spending, fiscal discipline, and honest legislation, the United States can avoid the costly damages of Washington’s annual budgetary car wreck and pave the way for economic security and sustainable growth.

Congress should begin this year by passing an actual budget that slows the growth in spending and the debt, reforms entitlements, and extends the tax cuts of 2017, permanently. Immediately lawmakers should refuse any caps deal or other spending increase, without commensurate spending offsets to avoid doing further damage.