Why We Are Standing With the French 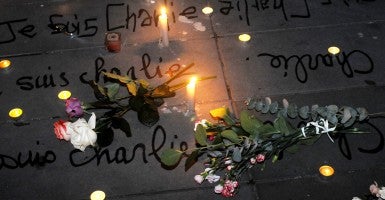 On Sept. 13, 2001, two days after 9/11, the Parisian daily Le Monde published an editorial titled “Nous sommes tous Américains,” or “We Are All Americans” in the language of Moliere. It shocked many, not least Le Monde’s legions of readers.

“How can we not feel, as we have in the gravest moments of our history, but profoundly in solidarity with this people and this country, the United States, with whom we are so close and to whom we owe our liberty, and therefore our solidarity,” wrote the long-time editor of Le Monde, Jean-Marie Colombani.

It was an extraordinary event, not least because Le Monde is a leftist publication not exactly known for pro-American affectations. Colombani’s mention of the U.S. role in liberating France from Hitler’s grip was stunning. There are many grateful Frenchmen who remember the GIs, but they are usually in places like Normandy and the Ardennes, not in the Left Bank of Paris.

It is in this vein that many Americans are reacting today to the carnage in eastern Paris, where two gunmen invaded the headquarters of the French satirical newspaper Charlie Hebdo, killing 12 and wounding many others.

The crime has all the look of a terrorist Islamic attack, as Charlie Hebdo delights in ridiculing all religions, including Islam. But the reason many Americans today are feeling that Nous sommes tous Francais runs deeper than mere alliance in the war on terror. Republican fellow feelings and memories of Lafayette and Rochambeau are suddenly awakened even in the most recalcitrant New England Yankee.

The good feelings that followed 9/11 in Paris were quickly dissipated and France soon went back to being “a prickly ally,” in Henry Kissinger’s description. Colombani got a ton of letters from irate socialist readers who pretty much said, “I definitely am not an American.”

Likewise, here we will soon go back to our uneasy relationship with France. Just not today. Today is the day to remember and honor Alexis de Toqueville, the Frenchman who understood us better than many Americans, and to repay Colombani the favor by remembering the role the French played in our independence.