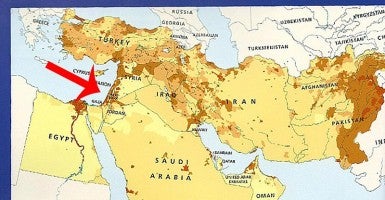 HarperCollins wanted to sell atlases created specifically for schools in the Middle East. Certainly a worthy mission, minus one major omission: the publishing giant left Israel off the map.

“This product has now been removed from sale in all territories and all remaining stock will be pulped,” says @HarperCollins

The atlas illustrates Syria, Jordan, even the West Bank and Gaza, but gives no mention of Israel.

Collins Bartholomew, the subsidiary of HarperCollins specializing in maps, originally defended the decision, telling UK-based publication The Tablet that the inclusion of Israel would have been “unacceptable” to the company’s Middle Eastern customers. The deletion was necessary to appease “local preferences.”

It wasn’t long before the company came under fire.

“The publication of this atlas will confirm Israel’s belief that there exists a hostility towards their country from parts of the Arab world,” Bishop Declan Lang, chairman of the Bishops’ Conference Department of International Affairs, told The Tablet. “It will not help to build up a spirit of trust leading to peaceful co-existence.”

Jane Clements, director of the Council of Christians and Jews, added that the exclusion of Israel risked “de-legitimizing” the nation in students’ minds.

“Maps can be a very powerful tool in terms of de-legitimizing ‘the other’ and can lead to confusion rather than clarity,” Clements said. “We would be keen to see relevant bodies ensure that all atlases anywhere reflect the official UN position on nations, boundaries and all political features.”

The omission was also contradicted in the book’s online description boasting “in-depth coverage of the region and its issues,” aiming to help students understand “the region’s challenges [and] its socio-economic development.”

HarperCollins has since retracted its original defense, pulling the books from further sale.

"This product has now been removed from sale in all territories and all remaining stock will be pulped." http://t.co/ySlxrWgT2u