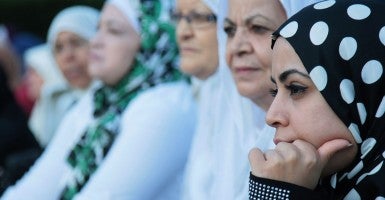 Saudi Arabia is the only country in the world where women are not permitted to drive. (Photo: Mohamed Hammi/Newscom)

Read any women’s magazine in the United States and you’ll see bitter complaints over women’s inequality in this country.

Men and women have different jobs, roles, desires and needs, but no law prohibits one sex from obtaining the same opportunity or experiences as the other—aside from women serving on the front lines of combat.

The same isn’t true in many other countries. In Saudi Arabia, women are not even allowed to drive.

Now, two women are facing terrorism charges for driving—a repercussion that makes little sense. That is, unless the authorities are attempting to make examples out of Lujain al-Hathlool, 25, and Maysa al-Amoudi, 33.

As one Saudi woman noted recently, there’s no “formal law” against driving but “religious edicts are often interpreted to mean it is illegal for women to drive.”

There’s no rhyme or reason to this lack of basic freedom to women except for that simple explanation. Now, al-Hathlool and al-Amoudi may pay an unfair price for their audacity to get behind the wheel.

These charges are somewhat unexpected, as a campaign to support women driving in Saudi has been ongoing for at least three years.

According to the New York Post, al-Hathlook and al-Amoudi, both of whom have previously spoken out publicly against the driving ban, have now been in prison 30 days—longer than any other woman for this reason.

A quick Google search reveals no publications for or by women in Saudi Arabia. They can’t even complain about their genuine inequality because their voices are silenced, they’re thrown in prison, their keys are literally taken away.

If American women want to be bitter about inequality, I suggest they set their sights across the ocean, where the real fight needs to take place.