Here Are the Most Biased Media Quotes of 2014 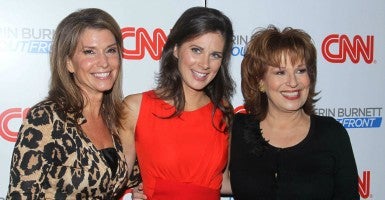 From Carol Costello on CNN making fun of the Palin family to just about every other segment on MSNBC, 2014 was a banner year for media bias.

I had the privilege of serving as a judge in the Media Research Center’s annual “Notable Quotables” awards – an amusing and stinging summary of the year’s worst reporting.

There are 15 awards in all – from the “Move Along, Nothing to See Here Award for Denying Obama’s Scandals” to “The Barbra Streisand Political IQ Award for Celebrity Vapidity.” And the runners-up in each category are real gems too.

You can see all the ‘”winners” here but, for a sneak peek, below are the top three vote-getters in the “Quote of the Year” category. (Personally, I thought Eleanor Clift’s comments were the most outrageous but admittedly it was a tight race…).

Quote of the Year winner:

Okay. I’m just going to come right out and say it: This is quite possibly the best minute and a half of audio we’ve ever come across — well, come across in a long time anyway. A massive brawl in Anchorage, Alaska, reportedly involving Sarah Palin’s kids and her husband. It was sparked after someone pushed one of her daughters at a party. … And now police have released audio of that interview. It does include some rather colorful language from Bristol. Here now is Bristol’s recollection of how that night unfolded. So sit back and enjoy. — “CNN Newsroom” anchor Carol Costello on Oct. 22, introducing audio of Bristol Palin describing how a man shoved her, dragged her on the ground and repeatedly cursed at her.

“Every media organization has investigated this [Benghazi] to death. This animates the right wing of the Republican Party. And I would like to point out that Ambassador [Chris] Stevens was not murdered. He died of smoke inhalation in the safe room in that CIA installation.” — The Daily Beast’s Eleanor Clift on “The McLaughlin Group,” May 11.

“You know, I’m a Christian preacher, and God finally said, ‘Look, I can’t send nobody else. I got to go myself.’ And I ain’t saying that Obama is Jesus, but for many of his followers he is.” — MSNBC contributor Michael Eric Dyson on “Melissa Harris-Perry” Aug. 23, arguing for Obama to visit Ferguson, Mo.