This Company Lets You Filter Explicit Content From Movies 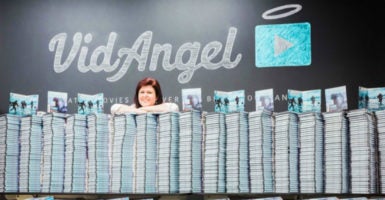 The video service VidAngel allows users to filter out content that they don't want to see or hear while watching a movie or TV show. (Photo: VidAngel)

Do you want to watch a movie at home without hearing profanities? There’s a filter for that.

VidAngel is a video filtering service started by four brothers who grew up in Idaho, which offers a tool to filter out bad language and graphic scenes from Hollywood productions, making video content family-friendly.

“We created this company because—as parents and consumers—we understand deeply the surging demand for filtering content to suit the needs of families,” Neal Harmon, CEO of VidAngel, said in a prepared statement. VidAngel has over 2,500 movie and TV show titles available for filtering. (Photo: Screenshot from VidAngel website)

The Provo, Utah, based company currently has over 2,500 movie and TV show titles available for filtering on devices such as smartphones and tablets, computers, and Apple TV.

Harmon, who has seven children that range in age from 1 year to 13 years old, says VidAngel makes watching a movie with his family more enjoyable.

“We don’t swear in our home,” Harmon told The Daily Signal. “We try to teach our children not to use words that are degrading to one another.”

When his children don’t hear those words, “they’re less likely to say them,” Harmon said. “It’s been nice for us because [filtering videos] solidifies that value that these kinds of words don’t enter our home.”

The service allows users to specify what explicit, or implied, parts of movies and TV shows they want to filter. The user purchases the video online from VidAngel for $20, then can sell the video back for $19 site credit (or $18 for high definition) within 24 hours. Essentially, a user can pay $1 to watch content. VidAngel CEO Neal Harmon says he is able to watch a movie with his whole family when using VidAngel. (Photo: VidAngel)

Harmon says that when he was growing up, his mother taught the brothers to “be careful with what you consume.”

“When we became young fathers and looked around the market for some kind of a filtering product for the streaming age and couldn’t find one … we decided to create one ourselves and use it for our families,” Harmon said. “We learned that other families wanted to use it as well.”

Individual scenes or words can be filtered from the video, from content such as scenes with smoking and alcohol consumption to gestures with a middle finger. Consumers are notified if filtering certain content removes significant portions of the movie.

According to an InspireBuzz and National Research Group poll conducted online for VidAngel in May, 57 percent of a “values audience,” whose faith is an important part of their lives, are more likely to say it is important to know about explicit content before deciding to watch a TV show or movie. Of the “values audience” parents, 82 percent “are likely to say it is ‘very important’ to know about any explicit content before deciding if their child should watch,” according to the poll. Since launching in early 2014, VidAngel has tried various methods to stream and filter the content to stay within legal rights and keep Hollywood studios happy. The company has found itself entangled in a legal battle with the Walt Disney Co., 20th Century Fox, Warner Bros., and Lucasfilm.

“The Family Movie Act was passed by Congress because these studios would not permit filtering … Congress in 2005 did its best to balance the interest of all parties in crafting a law that would allow consumers to enjoy filtered content,” Quinto told The Daily Signal. He added:

In doing so, Congress required that a consumer must lawfully buy a copy of a movie … In this process, Congress never anticipated that in 2016 consumer preference would swing greatly in favor of streaming and away from buying discs. So today, the studios are able to charge third parties that want to stream unfiltered content … But VidAngel is not required to buy a streaming license and the studios do not sell VidAngel a streaming license. “VidAngel can buy the discs back from consumers when they are finished and resell them just as a college bookstore would buy back textbooks at the end of the semester and sell used books to students the following semester,” Quinto told The Daily Signal.

Quinto calls it ironic that VidAngel is able to charge consumers for less than services that pay Hollywood studios for licenses to stream new, unfiltered content.

As stated in the complaint [against VidAngel] ‘Nothing in the [Family Movie Act] gives VidAngel the right to copy or publicly perform Plaintiffs’ copyrighted movies and television shows without authorization. ‘Nor does the FMA give VidAngel the right to circumvent the technological protection measures on DVDs and Blu-ray discs.’

A Walt Disney Company spokesperson, who emailed the above statement, did not respond to The Daily Signal’s email inquiries about why the company is trying to shut down the filtering service VidAngel provides, yet does not provide its own filtering service.

The caption for one of the photos accompanying this story has been corrected to reflect that VidAngel’s lawyer David W. Quinto referred to the Family Movie Act.