‘I Wouldn’t Eat It Either’: These Wyoming Schools Abandoned Federal School Lunch Guidelines 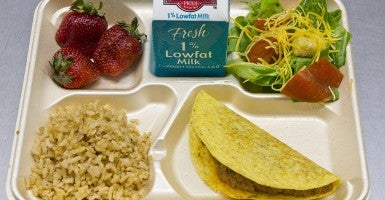 Seven Wyoming schools have said “no” to the federal school lunch guidelines — and the money that comes with them.

According to Wyoming Public Media, seven schools have decided to forego the federal standards instituted by the Healthy Hunger Free Kids Act and decide what to feed their students themselves.

“Universally, it was, ‘We are starving. We are hungry. This isn’t enough food for us,’” said Smith. “But we couldn’t blame them, because I looked at that school lunch and said, ‘I wouldn’t eat it either.’”

School districts that abandon the federal guidelines are financially penalized for doing so. Wyoming Public Media reports that “most schools simply can’t afford to abandon the federal subsidies. In Smith’s district, it meant walking away from about $50,000.”

Despite the high cost, Smith said there were “too many complaints,” and he knew he had to make a change.

The district did both: The number of food options increased and prices were raised. But, according to Wyoming Public Media, participation in the school lunch program went up 20 percent and “the district is making more money than it was under the program last year—even without the federal money.”

Absent the federal guidelines, the schools are now free to make their own decisions about what’s served for lunch.

Haydon Mullinax, a student at one of the affected schools, told Wyoming Public Media he is happy about the change.

“I actually enjoy it,” said Mullinax. “I wouldn’t enjoy lunch, and now every time I get into the lunchroom, I’m actually happy to get lunch.”

Dennis Decker, a food service director at one of the schools, told Wyoming Public Media that “the federal lunch standards are well intentioned,” but he’s happy he can do his “own thing.”

“A one-size-fits-all program doesn’t work everywhere,” said Decker. “And I also think that food is a little too personal to make a law. You can tell someone they can’t speed, but I don’t you can tell everybody what they have to eat every day.”

Decker told Wyoming Public Media the federal calorie guidelines were insufficient for students who are “athletes” or who “go home and work on a ranch.”

Tamra Jackson, nutrition supervisor for the Wyoming Department of Education, told Wyoming Public Media the federal standards “were set by some of the country’s best pediatricians and nutritionists.”

“We’re trying to lay a foundation for kids to make healthy choices when they get older,” said Jackson. “It amazes me that people are mad that we’re serving them healthy food.”

The Daily Signal has previously reported on the skimpy school lunches brought about by the federal standards, and students’ distaste for them. We recently reported on pictures of lunches students shared with the viral hashtag #thanksmichelleobama and our readers’ reaction to that story.