Minnesota Foes of Critical Race Theory Accuse BLM, NAACP of ‘Trying to Shut Us Down’ 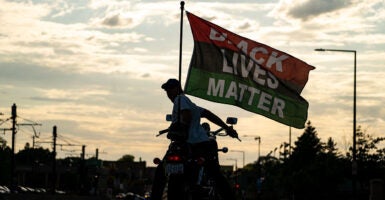 Opponents of critical race theory in Minnesota say advocates of the controversial subject matter, including some backers of Black Lives Matter, are trying to silence them. Pictured: A man on a motorcycle displays a Black Lives Matter flag at a rally at the Minnesota state Capitol on May 24 in St. Paul. (Photo: Kent Nishimura/ Los Angeles Times/ Getty Images)

A series of presentations across Minnesota to educate the public about the dangers of  critical race theory is encountering disruptions and even facing cancellations due to what its sponsor says are efforts by Black Lives Matter and the NAACP.

The presentations, called the “Raise Our Standards” tour, in which attendees are educated about critical race theory also cover “revisions to Minnesota’s social studies standards that are now in progress, the ‘woke’ movement that is transforming our education system, alternatives to public schools, and how to get involved,” according to the sponsoring organization, the Center of the American Experiment.

“The Left in Minnesota, led by Black Lives Matter and the NAACP, are afraid of a free exchange of ideas, so they are trying to shut us down instead. It won’t work,” John Hinderaker, president of the Golden Valley, Minnesota-based nonprofit, said in a statement.

Hundreds of Minnesotans have participated in the Raise Our Standards tour, and we will not be deterred by these childish tactics. We thank the Moorhead police officers for helping us restore order at the Moorhead event, and Duluth will be rescheduled as soon as we find a venue with the courage to host the event.

At the stop in Moorhead, Minnesota, held at a Courtyard Marriott hotel on June 15, a woman was arrested for disrupting the event.

In a press release, the Center of the American Experiment said the Duluth presentation, which was scheduled “weeks” in advance and was set to be held at the Northland Country Club, was canceled two days before it was supposed to be held last Thursday.

The event was rescheduled and was set to be held at a Holiday Inn that “agreed to host the meeting before calling back and canceling the same day, presumably after pressure from the NAACP and others,” the American Experiment statement said.

In a Facebook post, the Duluth branch of the NAACP commented on the Duluth Raise Our Standards presentation being postponed, saying, “Thank you, Duluth! You made it known that we have no desire to host white supremacists in our community.”

The Daily Signal reached out to Holiday Inn, Marriott, Black Lives Matter, the Northland Country Club, and the NAACP for comment, but did not receive a response.

In a statement to The Daily Signal, Mike Gonzalez, a senior fellow at The Heritage Foundation and author of “The Plot to Change America: How Identity Politics Is Dividing the Land of the Free,” said what is happening with the American Experiment’s Raise Our Standards tour is indicative of the divisive nature of critical race theory. (The Daily Signal is the news outlet of The Heritage Foundation.)

“This is a sign of the desperation of those who sought to divide us with critical race theory, to use it as a tool to change the country, and now are shocked that they met opposition,” Gonzalez said.

“They are reacting as they always do, with violence and by trying to cancel those who disagree with them,” he added.