Why Did John Kerry Just Apologize for America? 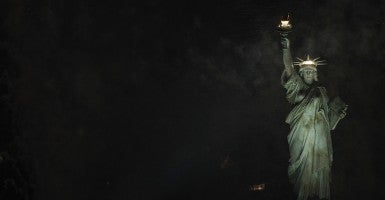 Mike Gonzalez, a senior fellow at The Heritage Foundation, is a widely experienced international correspondent, commentator, and editor who has reported from Asia, Europe, and Latin America. He served in the George W. Bush administration, first at the Securities and Exchange Commission and then at the State Department, and is the author of "A Race for the Future: How Conservatives Can Break the Liberal Monopoly on Hispanic Americans." Read his research.

Before hopping on a plane to Lima last Wednesday, Secretary of State John Kerry delivered a key speech on Latin America in which he again engaged in the ritualistic self-flagellation for which this administration has lamentably come to be known. Kerry’s apologia included everything that’s been in the news for the past month, and then some.

It was more than an embarrassing moment or a wasted opportunity: it was a win for tyranny. The cause of liberty needs a strong, confident America that has the back of those who’ll dare anything to be free. Instead, Kerry strove to make clear that he was not the Ugly American, bringing up Ferguson, New York, and the Senate’s partisan report on our treatment of terrorist prisoners.

“Democracy is not a final destination; it is an endless journey,” the secretary pondered. “And we see that right here at home.”

“Even yesterday with the report that came out from the Senate Select Committee on Intelligence—we hold ourselves accountable to an ugly, horrible period,” Kerry went on, adding later: “from the streets of New York City to Ferguson, Missouri, we are learning in painful, searing ways that justice and equality are not things that you can just parse out to some and deny to others.”

Kerry also made sure to mention the “genocide trial” of “former Guatemalan dictator Efrain Rios Montt,” who during his 18-month tenure as president in the early 1980s dealt severe setbacks to Cuban- and Soviet-backed communist guerrillas. Kerry knows full well that the international Left has zeroed in on this trial as a way to besmirch President Reagan, who kept the region from becoming a forward base for Soviet outposts.

We’ll Whip Ourselves, Not Tyrants

So who did Kerry not mention? Search his speech at the State Department website for these words: Cuba, Castro, Venezuela, or its strongman Nicolas Maduro—whom Congress has just passed sanctions against for gross human rights violations—or Bolivia and its dictator-wannabe Evo Morales, Nicaragua or its anti-American leader Danny Ortega. Or save your time and take my word: they’re not there.

Neither are mentions of Leopoldo Lopez, the Venezuelan opposition leader behind bars for almost a year, or his compatriot, the brave Maria Corina Machado, who will soon join him there. Also missing were Cuba’s stalwart Ladies in White, middle-aged women who are undeterred by the beatings they receive in the streets of Cuba but dress up their wounds and take to the streets again. Or Cuban opposition leader Antunez or Yris Tamara Pérez Aguilera.

All of them are begging the Obama administration for support, but all they got from Kerry were infantilisms and platitudes about “climate change, and clean energy—which is, after all, the solution to climate change,” “the LGBT community” and the fact that “we recognize a basic truth: Social and economic exclusion anywhere is a threat to justice everywhere.”

So it shouldn’t surprise that on the day Kerry spoke Cuban police beat up human rights protestors on the streets of Havana, and the next day Hong Kong police forcefully ended pro-democracy demonstrations.

America, to be sure, doesn’t conduct its foreign policy to correct all the world’s wrongs, but to secure our freedom and sovereignty. “She goes not abroad in search of monsters to destroy,” famously said one of Kerry’s predecessors, John Quincy Adams, in his 1821 Independence Day speech. But Adams understood that we are safer when freedom expands in the world, so he quickly added in the same speech a call for European citizens to overthrow their monarchical tyrants, outraging foreign diplomats in attendance and earning a protest from the czar’s government in Moscow.

Foreign liberty lovers seek moral validation of their cause, the knowledge that the world’s only superpower stands by them and believes in their cause.

To this day, what foreign liberty-seekers want from us is not “boots on the ground,” much less “nation-building.” They seek moral validation of their cause, the knowledge that an outside power—the world’s only superpower, no less—stands by them and believes in their cause. Rios Montt was a strongman more than three decades ago. There are anti-American dictators in Latin America right now who daily repress populations who need to know we’re on their side.

By happenstance, Sen. Ted Cruz, R-Texas, was speaking at The Heritage Foundation at the same time Kerry spoke at State. Cruz made the following succinct point about the policy followed by Kerry and his predecessor Hillary Clinton: “weakness is provocative.”

“Today, the consequence of the Obama-Clinton foreign policy is that our friends no longer trust us, and our enemies no longer fear us,” said Cruz. “That is profoundly dangerous for America and is profoundly dangerous for the world.” Cruz added that, under Obama, the United States risks going from “the leader of the free world to a dutiful and obedient member of the international community.” He should have included Kerry in that critique.