If Obama Wants More Solar Energy, Why Is He Making It So Expensive? 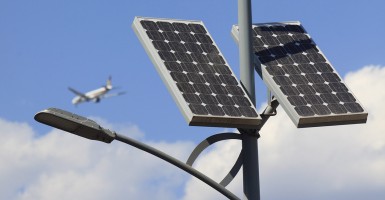 President Obama has made it quite clear he wants to see more renewable energy in the United States. Then why is his administration making it more expensive?

The U.S. government recently announced plans to impose taxes of up to 78.42 percent on imported solar parts to protect U.S. manufacturers from foreign competition.

In this case, a foreign-owned firm that produces goods in the United States and benefits from U.S. government subsidies is seeking tariffs on inexpensive and allegedly subsidized foreign-made goods used by U.S. companies to generate solar energy.

Mukesh Dulani, president of SolarWorld, the German-owned company that requested the tariffs on foreign-made goods, said, “These remedies come just in time to enable the domestic industry to return to conditions of fair trade.”

But according to Jigar Shah, president of the Coalition for Affordable Solar Energy, “… the U.S. government is actually creating a module shortage that will make it hard for the U.S. solar industry to reach its 2015 and 2016 goals.”

The imported solar products in question allegedly were subsidized by foreign governments and sold at a lower price in the United States than in the countries where they were produced.

Before the proposed duties take effect, the U.S. International Trade Commission must determine whether U.S. companies have been injured by these imports. The legal hook in this matter is the U.S. “antidumping laws,” statutory provisions that allow for the imposition of tariffs on goods that are allegedly being imported at “unfairly low” prices and thereby harm American industries.

In reality, antidumping laws have little to do with “fair” trade. As The Heritage Foundation has observed:

“The antidumping laws are confusing and arbitrary, and in many instances merely allow American firms to secure punitive tariffs against competing importers where no unfair trade practices are involved. Worse, these laws drive up the costs of imported components used by other American enterprises, making their products less competitive in world markets.”

For example, U.S. law forbids the ITC from considering the impact of the imports in question on the overall American economy and downstream industries, only on the firms requesting protection from their foreign competitors.

And what about the billions of dollars in subsidies U.S. solar manufacturers have benefited from, including around $100 million in state and local incentives that SolarWorld received for its Hillsboro, Fla., production facility?

The solar industry has received handout after handout, including billions of dollars from taxpayers in the stimulus package, a generous investment tax credit as well as loan guarantees backed by the federal government (Solyndra anyone?). Further, 37 states have renewable portfolio standards that mandate the use of renewable energy.

The complexities involved in the SolarWorld case provide a good illustration of why U.S. antidumping laws should be modernized to allow Americans to take full advantage of the increasingly interconnected global economy.

And the market distortions caused by the federal government using taxpayer dollars to pick winners and losers provides plenty of reason to get the government out of the energy business.