The Meaning of the Constitution 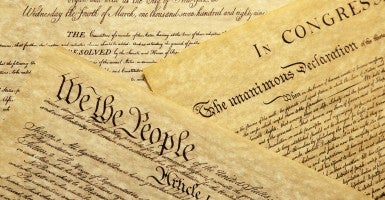 The Constitution of the United States has endured for over two centuries. It remains the object of reverence for nearly all Americans and an object of admiration by peoples around the world.

William Gladstone was right in 1878 when he described the U.S. Constitution as “the most wonderful work ever struck off at a given time by the brain and purpose of man.”

>>> This is an excerpt from The Heritage Guide to the Constitution

Part of the reason for the Constitution’s enduring strength is that it is the complement of the Declaration of Independence.

The Declaration provided the philosophical basis for a government that exercises legitimate power by “the consent of the governed,” and it defined the conditions of a free people, whose rights and liberty are derived from their Creator.

The Constitution delineated the structure of government and the rules for its operation, consistent with the creed of human liberty proclaimed in the Declaration.

The Constitution was born in crisis, when the very existence of the new United States was in jeopardy. The Framers understood the gravity of their task.

Several important themes permeated the completed draft of the Constitution. The first, reflecting the mandate of the Declaration of Independence, was the recognition that the ultimate authority of a legitimate government depends on the consent of a free people.

Thomas Jefferson had set forth the basic principle in his famous formulation:

We hold these truths to be self-evident, that all men are created equal, that they are endowed by their Creator with certain unalienable Rights, that among these are Life, Liberty, and the pursuit of Happiness. That to secure these rights, Governments are instituted among Men deriving their just powers from the consent of the governed.

That “all men are created equal” means that they are equally endowed with unalienable rights. Nature does not single out who is to govern and who is to be governed; there is no divine right of kings. Nor are rights a matter of legal privilege or the benevolence of some ruling class. Fundamental rights exist by nature, prior to government and conventional laws.

It is because these individual rights are left unsecured that governments are instituted among men.

In The Heritage Guide to the Constitution, we seek to present the Founders’ understanding of the Constitution and its various provisions, and examine the judicial interpretations and political circumstances that make up the historical development of constitutional law.

The Constitution is our most fundamental law. It is, in its own words, “the supreme Law of the Land.”

Its translation into the legal rules under which we live occurs through the actions of all government entities, federal and state.

The Constitution—the original document of 1787 plus its amendments—is and must be understood to be the standard against which all laws, policies, and interpretations should be measured.

It is our fundamental law because it represents the settled and deliberate will of the people, against which the actions of government officials must be squared.

In the end, the continued success and viability of our democratic Republic depends on our fidelity to, and the faithful exposition and interpretation of, this Constitution, our great charter of liberty.