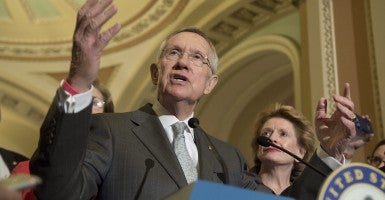 In his final move as majority leader, Sen. Harry Reid ushered through a series of tax breaks that directly benefit residents of his home state of Nevada.

The Senate passed the tax bill 76-16 earlier this week—the last legislation it would vote on before the end of the 113th Congress and Reid’s tenure as majority leader.

“Congress needs to pursue sweeping tax reform that creates opportunity and fairness for everyone,” says @DanHoller

The inclusion of two provisions were beneficial to both Reid’s home state and Florida, states without a state income tax and where residents were hit hard by the housing market crash.

Reid touted his work in pushing through the tax extenders legislation in a press release Wednesday, saying his position as Democratic leader helped him deliver “on a number of priorities to grow Nevada’s economy.”

“These deductions will save Nevada families and taxpayers millions of dollars and are important to renew as our state’s economic and housing security continue to recover,” the majority leader said. “I will continue to ensure these tax cuts are protected for Nevada.”

The senator’s office did not return The Daily Signal’s request for comment.

The tax extenders received criticism from both Republicans and Democrats, but Heritage Foundation tax and economic policy expert Curtis Dubay said the legislation was a “mixed bag of sound policies and policies that Congress should have abolished long ago.”

“Given the desire of the Senate and President Obama to retain the unjustified policies, a one-year extension is sensible because it prevents a tax hike and keeps in place many policies necessary for a better functioning tax system,” he said.

“It’s nice to be able to do things for your state, but that isn’t our charge,” he told his fellow senators. “Our charge is to protect the future of our country by upholding the Constitution and ensuring the liberty that’s guaranteed there is protected and preserved.”

Dan Holler, spokesman for Heritage Action for America, the lobbying arm of The Heritage Foundation, told The Daily Signal that the tax code should benefit all Americans, not just a select subset.

“Our tax code is riddled with distortions,” he said. “Rather than continually rearranging a chaotic code with tweaks that reek of favoritism, Congress needs to pursue sweeping tax reform that creates opportunity and fairness for everyone.”