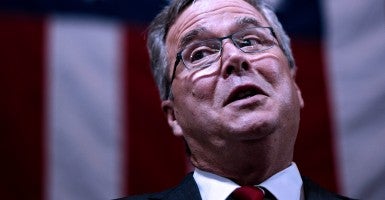 Jeb Bush announced today via Facebook that he has “decided to actively explore” a presidential run and will launch a leadership PAC early next year to help him “facilitate conversations with citizens across America.”

>>> Related: 9 Interesting Facts You May Not Know About Jeb Bush

That’s as close as any potential GOP presidential candidate has come yet to saying, “I’m in.”

But before everyone starts dusting off their old Bush and Clinton paraphernalia for a rematch of the families in 2016, let’s consider that while Democrats may have a weak bench of candidates this go round, the same is not true for the GOP.

For the first time in a very long time, the Republican Party has not one, not two, but several would-be candidates, at both the state and national level, who are not only “viable,” but also conservative. And it’s the latter ingredient that many today question about Jeb Bush.

The GOP has not one, not two, but several would-be candidates who are not only “viable” but also conservative.

In years past, he was often considered the most conservative member of the Bush family involved in politics. But he has gone from being a champion of school choice as the governor of Florida to a vocal supporter of nationalizing education standards via Common Core.

And his comments related to immigration reform are troubling—from calling on the GOP to pass “comprehensive” immigration reform legislation, which included amnesty, to criticizing those Americans opposed to amnesty, saying “it shouldn’t rile people up that people are actually coming to this country to provide for their families.”

Right. The American people who want a secure border, who are concerned about the job market and providing for their families and who believe immigrants who want to come here should have to do so legally, are the problem.

Such comments and policy positions don’t sit well with the conservative base of the GOP, and for that matter, many independents.

The voters who just gave Republicans big victories in the 2014 midterms are not likely to be enthusiastic about candidates whose main selling point is “they can win.” Been there, done that. And in the cases of Dole, McCain and Romney, lost that.

If Jeb Bush hopes to change that narrative, he’ll need to return to his conservative roots and convince both conservative and independent voters he won’t just be more of the status quo in Washington.

It’s probably a good thing he’s getting an early start.

Note: Jeb Bush was a member of The Heritage Foundation Board of Trustees from 1995-1997.