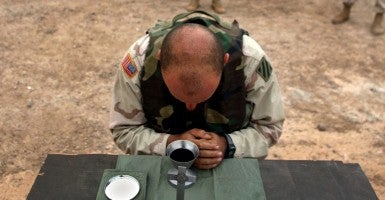 The Army says a military chaplain stepped over a line by citing the Bible's King David in a suicide-prevention seminar. (Photo: Newscom)

The Army has disciplined a military chaplain for making references to the Bible during a suicide-prevention seminar last month.

A serviceman brought the Judeo-Christian religious content to the attention of an atheist group, which complained about it. Now, the chaplain is fighting back, maintaining he did nothing wrong.

The dispute has renewed a debate over the appropriate role of faith in the military.

The chaplain, Capt. Joe Lawhorn, conducted the training session on suicide prevention Nov. 20 at the University of North Georgia. During the session, he shared his personal struggles with depression while an Army Ranger.

What upset the atheist group is that Lawhorn explained how he learned to conquer adversity by following the example of Israel’s warrior king, David, one of the great heroes of the Old Testament.

>>> Commentary: Is the Navy Removing Bibles from Hotel Rooms?

A week later, on Thanksgiving, Lawhorn received a letter of concern from Col. David Fivecoat, commander of the Airborne and Ranger Training Brigade at Fort Benning, Ga.

During this training, you advocated, or were perceived to advocate for Christianity and used Christian scripture and solutions. This is in direct contrast with Army Regulation 600-20 and violates the Army’s Equal Opportunity Policy.

The letter, described as “administrative in nature,” also issued a stern warning to Lawhorn to be “careful to avoid any perception you are advocating one system of beliefs over another.” It will remain in the chaplain’s file for up to three years.

Still at issue is whether Lawhorn improperly inserted his evangelical Christian beliefs into the suicide-prevention training session or was simply speaking from personal experience.

Col. Ron Crews, a retired military chaplain who is now executive director of Chaplain Alliance for Religious Liberty, came to Lawhorn’s defense. He urged the Army to reconsider its actions and remove the letter from Lawhorn’s file:

Crews also noted that no one at the training session filed a formal complaint. Instead, he said, one Ranger in attendance took a photo of a handout distributed by Lawhorn and posted it on the Facebook page of the Military Association of Atheists and Freethinkers. The group bills itself as a “national non-profit building community for atheists and humanists in the military.”

Crews said the organization’s president, Jason Torpy, proceeded to make an issue of it by writing a series of articles on Lawhorn’s suicide-prevention briefing.

That’s “not the point,” Torpy said in a telephone interview with The Daily Signal:

This chaplain violated the privilege and responsibility he had and he exploited that opportunity to push his personal religious beliefs on the captive audience of military personnel. So it doesn’t matter where the complaint came from.

>>> Commentary: Religious Liberty May Be Threatened in the Military

Since no recording has surfaced, Torpy points to the handout as proof that Lawhorn replaced “sound suicide-prevention training with that chaplain’s personal, evangelical interest.” He said:

You can see clearly from the handout what people in that assembled mass saw was a chaplain promoting his personal beliefs as an integral part of the activity through a handout with Christian counseling centers, Bibles verses and the core Christian message. No amount of ‘Well, this is just my personal beliefs’ makes it OK.

On the front of the handout, Lawhorn drew from the Bible’s Book of Psalms and referenced its central Jewish figure, David, as an example of how to manage thoughts of depression and suicide.

On the back, Lawhorn provided referrals for local counseling along with other crisis contacts in government.

The Daily Signal, researching the counseling centers listed by Lawhorn, discovered that only two of the four were affiliated with a particular religion. The secular referrals were North Georgia Counseling and Education Center and MAM Counseling Inc.

It is outrageous that an Army chaplain would have his career threatened because he cared so much about his soldiers that he opened up to them about his personal struggles and what worked for him.