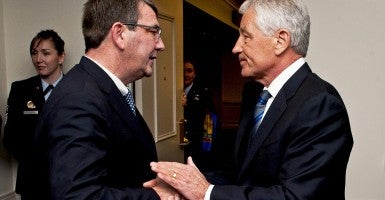 Ashton Carter looks like a shoe-in for the next Secretary of Defense.  All the other possible candidates have pulled themselves from contention, and it is unlikely others will appear.

The departure of Chuck Hagel left the Obama administration scrambling to find a suitable replacement that would take the job,  Carter, the former under secretary of defense for Acquisition, Technology and Logistics, and most recently, former deputy secretary of defense, seems to be the “ winner.”

Additionally, Carter has already been confirmed twice, is not terribly controversial and is unlikely to have too tough a time getting confirmed for this job.  That said, while he will likely get a gentle hand personally, his confirmation hearing will almost assuredly be platform from which to shine a light on the dysfunctional national security policy of Obama.

>>> National Security Priorities for the Next Secretary of Defense

No one believes that Hagel was fired for doing exactly what Obama hired him to do, but even the least active defense secretary in anyone’s memory got tired of being left out of the key policy deliberations concerning his department.

The heavy centralization of policy in the hands of the 350-person White House national security staff and National Security Advisor Susan Rice, has made the defense secretary position one devoid of strategic relevance.  Even Hagel had a limit on the isolation, and so he dropped his resignation.

Obama tried to make lemonade by saying it was a chance to shake up the foreign policy apparatus (long called for by both the left and the right), but the president went directly from podium with Hagel to a meeting where he told the micromanaging staffers that they were all critical to him and none were changing.

Carter is a good manager, and will help run the Department of Defense as well as it can be done, but he will not be a strategic policy player.  That is unfortunate, because that is exactly what the nation needs right now.  The next two years will be difficult and fraught with challenges that seem to be beyond the president’s team of loyal partisan aids.  Doubling down on failure is a poor choice.