Congress’ Sneaky Tactic to Grab More Land for the Government 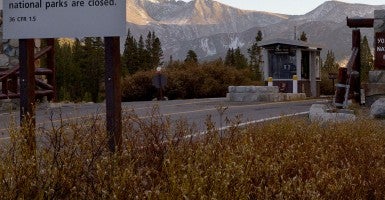 A sign placed at the eastern entrance to Yosemite National Park along Highway 120 alerts visitors of the park closure due to the federal government shutdown in 2013. Congress is now trying to grab more U.S. land for the government. (Photo: Newscom)

Congress has returned from the mid-term elections and members are hammering out the details of the National Defense Authorization Act.

NDAA, which has passed for more than 50 years consecutively, provides policy guidance for the U.S. defense budget.

The importance of the NDAA to the defense budgeting process and its traditional status as a “must-pass” piece of legislation makes it an inviting target for pet projects and wasteful spending.

Does Congress really need to add to the federal estate when the feds already own 640 million acres of land, approaching one-third the total area of the United States?

Unfortunately, as this year’s lame duck session winds down, some lawmakers are trying to end-run the normal legislative process in a rushed, closed-door approach. This presents an opportunity not only to lard up the NDAA with pork, but also to muddy up defense policy making and force through bad policies in an opaque manner.

These provisions would lead to more government ownership of America’s land and more restrictive land-use policies that prohibit energy development and economic activity.

Does Congress really need to add to the federal estate when the feds already own 640 million acres of land, approaching one-third the total area of the United States? Congress should be transferring more responsibility to the states and private owners, not taking more land away from them.  Doing so would allow for energy production and more economic activity.

Production of oil and natural gas in the United States is booming, but that boom is largely occurring on state and private-owned lands. Large swaths of federal lands abundant with natural resources are locked up by the government.

We should open up leasing, exploration and production to these areas. This doesn’t mean drilling in the Grand Canyon. There are plenty of other energy-rich options out West and in places such as Alaska where the feds own the majority of the land.  Montana State University economist Holly Fretwell sums up the situation well by saying, “Science cannot determine whether hiking, biking or timber harvest is a higher-valued use. Instead, management decisions—regarding recreation use, commodity production or restoration activities—depend on budget appropriations and special interest battles.” This is exactly what’s occurring with the land-grab provisions in NDAA.

Perversely, the land grabs policies likely will do more environmental harm than good. America’s largest land holder, the Department of the Interior, has a maintenance backlog between $13.5 billion and $20 billion for the land it already owns, a deficit that results in environmental degradation, soil erosion, gross amounts of littering and land mismanagement. As The Heritage Foundation writes in The American Conservation Ethic, a broad report on environmental conservation, devolving responsibility to the states and individuals would “give responsibility for managing the lands to those with the most knowledge of the land and the most to gain from its productivity.” They are also most invested in environmental protection.

Potential provisions in NDAA include:

If these provisions are included in the NDAA, it will only make the hill steeper for much-needed land reform and a reversal of the trend to continually increase the federal estate and extend federal influence and restrictions. Incorporating these environmental provisions into the legislation turns the NDAA into a vehicle for pork. This is unacceptable and harms our defense policy efforts long term.