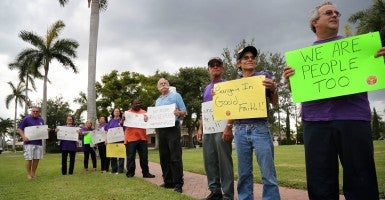 Communications Workers of America collects mandatory fees from more than 40,000 workers who don’t want to join the union.

Based on the union’s 2014 annual report to the U.S. Department of Labor, CWA had 623,020 members and 43,353 “agency fee payers” as of May 31. CWA takes mandatory fees from workers in private industry and in taxpayer-funded government jobs.

CWA President Larry Cohen, a self-proclaimed warrior for “economic justice,” was paid $199,698 during the union’s 2014 fiscal year. Cohen was one of 234 union officers and employees paid six figures.

In 2011, CWA was one of several large labor unions behind the Occupy Wall Street movement. Cohen echoed those themes at a 2012 National People’s Action rally in Washington, D.C., opening his speech with three repetitions of the call and response “Tell me what democracy looks like,” “This is what democracy looks like” before laying out the CWA agenda.

Cohen called for amnesty for illegal immigrants, restrictions on political speech, opposition to voter identification laws and an end to the U.S. Senate filibuster.

Encouraging rally attendees to “focus on the limits in this democracy but also dream and aim higher for the economic justice that we demand,” Cohen screamed, “We can say to the 1 percent, ‘You’ve had your day, this is our day!’”