A Thanksgiving Sacrifice to Remember 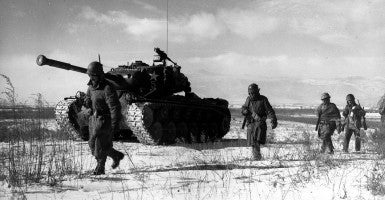 A column of the U.S. 1st Marine Division move through Chinese lines during their breakout from the Chosin Reservoir. (Photo: Wikimedia)

As we sit down to feast with our families this holiday, the blessing might well include a word of thanks to the men and women of our armed forces. While we celebrate our national holiday in the warmth and comfort of homes, they serve at grave peril in faraway places like Afghanistan.

Some of our troops are in South Korea. A United Nations committee has just voted to condemn the government of North Korea for human rights abuses and recommended its leaders – including Dictator Kim Jong-un – be prosecuted for crimes against humanity. North Korea’s barbarity towards its own people reminds us of the continuing danger posed by the murderous thugs in Pyongyang.

But it should also spur us to remember those Americans who, 64 years ago, spent Thanksgiving fighting at the Chosin Reservoir in North Korea. It was a vicious, brutal battle and one of the Marine Corps’ finest hours.

By Thanksgiving of 1950, X Corps (a joint force composed of American Army and UN troops), had advanced along with the 1st Marine Division deep into North Korea, almost to the Yalu River. But in an attack that caught the Americans by surprise, Chinese troops poured across the border and attacked in almost overwhelming waves.

Many units of X Corps disintegrated under the relentless attacks. The Marines, under the command of Gen. Oliver Smith and Marine Corps legend Col. Chesty Puller, along with elements of the 7th Infantry Division and the British Royal Marines, fought a rear guard action throughout a slow retreat from Chosin. Smith famously declared, “Gentlemen, we are not retreating. We are merely attacking in another direction.” And he was correct. As a military historian later observed, you can’t retreat when you are completely surrounded. Marines under the cover of a large boulder engaging the Chinese. (Photo: Wikimedia)

The Marines and their brethren fought against overwhelming odds. They were outnumbered five to one. The conditions were atrocious. Temperatures plunged to 30-, then 40- degrees below zero. Snow and ice coated them and their weapons. Sometimes the blizzard conditions made it impossible to see more than a few yards. Weapons and blood plasma froze. Medics carried morphine ampoules in their mouths to keep them warm. Trucks and jeeps had to be kept running constantly because it was almost impossible to get them started again.

From the hills and mountains surrounding the narrow roads, the Chinese rained machine gun fire and mortar shells on the Marines. Leatherneck battalions had to leapfrog each other as they moved south, fighting “yard by bitterly contested yard” to clear the heights commanding the road in front of them. Dedicated pilots from Marine Air Wings and Navy and Air Force units flew interdiction missions when the weather allowed. But for the most part, it was constant close quarter fighting–grenades, small arms and blades. The Marines won those fights.

At one point, the Marine advance halted. For a third time, the Chinese had destroyed a bridge over a gorge in the Funchlin Pass—this time, beyond repair. Air Force C-119’s parachuted eight bridge sections into the Marine perimeter. Six were recovered undamaged, allowing the Marines and an Army engineering unit to bridge the gorge.

Although the Chinese inflicted severe casualties, they could not break the Marine companies. As Max Hastings wrote in his history of the Korean War, “It is a tribute to the quality of units reconstituted only three months earlier, heavily manned by [Marine] reservists, that they mounted so dogged a defense under the most appalling conditions.”

Unlike many of the retreating American Army forces that wanted to simply abandon their heavy equipment and artillery, the Marines doggedly refused to leave anything behind. Gen. Smith was adamant about conducting “an orderly and honorable withdrawal.” As they fought their way out of the mountains to the Korean coast, the Marines brought their equipment, their wounded and their dead.

When they reached “Hellfire Valley” (between Hagau and Koto-ri), the situation looked impossible. Chesty Puller was unfazed. He climbed up on a ration box and told his men: “I don’t give a good goddamn how many Chinese laundrymen there are between us and Hungnam. There aren’t enough in the world to stop a Marine regiment going where it wants to go! Christ in His mercy will see us through.” Christ, the Marines’ raw courage and dogged determination and their lead-from-the-front officers saw them through. Puller later told reporters, “Remember when you write, this was no retreat. All that happened was we found more Chinese behind us than in front of us. So we about-faced and attacked.” The Marines and the US X Corps were able to reach the port city of Hungnam. They were evacuated by a 193-ship armada, which also took out 100,000 civilian Korean refugees, who were thus saved from the brutality that North Korea has inflicted on its people.

The 1st Marine Division paid a heavy price: 4,418 battle casualties, including 718 dead and 192 missing. They suffered 7,313 non-battle casualties, too, mostly cases of frostbite from the severe cold. But their valor and sacrifice saved the remnants of the American Army from what could have been one of its worst disasters.

So this Thanksgiving, let us remember the American warriors who went through hell 64 years ago to keep the forces of repression and totalitarianism at bay. We owe them a debt that neither we—nor the free peoples of South Korea—can ever repay.

A prior version of this story was previously published by Townhall.com on Nov. 18, 2010.