After Speaking Honestly About His Religious Views, Baseball Player Instructed to Only Talk Sports 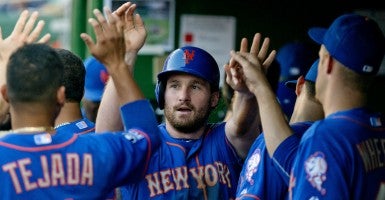 Daniel Murphy with his Mets teammates in the dugout. (Ron Sachs/ZUMA Press/Newscom)

Now he’s no longer allowed to talk about his religious beliefs.

Why is the nation even discussing what Murphy, a second baseman for the New York Mets, thinks about gays and lesbians?

Well, because after Billy Bean, a gay former Major League Baseball player who now serves as the League’s Ambassador for Inclusion, visited the Mets, a reporter talked to Murphy.

According to the NJ Advance Media report, Murphy “is ready for a gay teammate, “ and “Murphy, a devout Christian, said he would embrace Bean despite a divergence in their beliefs.”

Murphy took pains to clarify that while he opposed Bean’s choices, he was open to getting to know Bean.

“I disagree with his lifestyle,” Murphy said of Bean. “I do disagree with the fact that Billy is a homosexual. That doesn’t mean I can’t still invest in him and get to know him.”

Maybe, as a Christian, that we haven’t been as articulate enough in describing what our actual stance is on homosexuality … We love the people. We disagree [with] the lifestyle. That’s the way I would describe it for me. It’s the same way that there are aspects of my life that I’m trying to surrender to Christ in my own life.

And that’s the last we’re going to hear from Murphy on the subject.

On Wednesday, an ESPN story headlined “Murphy now to talk baseball only” appeared. The story’s first line was “New York Mets second baseman Daniel Murphy will no longer address his religious beliefs and will stick to baseball, a team spokesman said Wednesday.”

True, Murphy got to keep his job, unlike former Mozilla CEO Brendan Eich and Atlanta Fire Chief Kelvin Cochran, both of whom had to step down after their personal views on same-sex marriage received attention.

But why can’t Murphy be honest about his views? After all, he didn’t make his comments out of the blue. Bean’s visit was publicized. Murphy wasn’t just randomly talking, but was reacting to a specific event.

Inclusion is about everyone, even those who might disagree with the message: http://t.co/CY6EZ4eUmW pic.twitter.com/eITp5GK7uS

Bean himself wrote in an MLB.com column he “appreciate[d] that Daniel spoke his truth.” Bean continued:

I respect him, and I want everyone to know that he was respectful of me. We have baseball in common, and for now, that might be the only thing. But it’s a start. … Inclusion means everyone, plain and simple. Daniel is part of that group.

What we’re seeing here is a dialogue: Bean and Murphy are both being honest about their views. They’re also both clearly trying to be considerate and respectful of the other’s views.

That’s what our society needs.

Americans are divided on a host of controversial issues—from abortion to wars to vaccines to, yes, same-sex marriage. The way to work together and live in harmony isn’t to pretend we all agree. It isn’t to silence those who have controversial positions.

Instead, we need to keep having honest and genuine conversations about these matters, as awkward and painful and frustrating as those conversations can be.

We don’t want to live in an amoral society, where the only value is conformity. We want to be a nation that isn’t afraid of disagreements, particularly when both sides are striving to create a society that cherishes what is right and good.

Murphy and Bean were showing us the way forward. It’s too bad the Mets have made sure their dialogue can’t continue.