How Conservatives Can Attack Obama’s Immigration Plan Without Alienating Hispanics 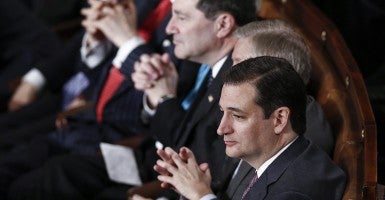 Sen. Ted Cruz with other members before a joint session of Congress. (Photo: Newscom)

At stake in the fight over President Obama’s executive action on immigration could be the future voting patterns of Hispanics—not just of the 5 million or so illegal immigrants he expects to legalize, but also the 46 million or so potential voters who are here legally.

If Obama can assimilate all of them into his vision of a new America that accepts greater reliance on public assistance and government interference, then it’s game over for the conservative cause.

This is why it’s crucial for conservatives to do two things that may seem contradictory but are in fact complementary. The first is to fight executive amnesty through all means available. The second is to not allow the issue of illegal immigration to control the Right’s message to Hispanic Americans.

Rhetorically, it should not be hard to fight executive action. There are upward of five videos of the president himself telling crowds (mostly Hispanic, in fact) that it would be illegal for him to act on his own. That Obama has the impudence to do it now and risk putting the country through a damaging constitutional crisis shows he knows how high the stakes are.

Conservatives of all parties must remain united and single-minded in action and message. They should not fall for the Obama trap of passing “a bill that I can sign.” Everyone knows that means a “comprehensive” immigration package—which would suit the president, but not the country.

Appeal to Hispanics Who Immigrated Legally

As conservatives fight adding these 5 million future voters, they must court the other 46 million Hispanics.

Enlisting these Hispanics in the fight for an America of traditional values, intact families and communities, a strong military and a government that’s off our backs and not lying to us is key. It’s also easier than people think.

Consider Kansas as Exhibit A. The Hispanic vote there is certainly not negligible, and growing at 6 percent annually. A tax-cutting Gov. Sam Brownback won this Hispanic vote outright. The president is no doubt aware that the GOP did very well with Hispanics two weeks ago, and doubling down on illegal immigration may be his response.

The GOP improved vastly on Mitt Romney’s 2012 performance among Hispanics, winning 36 percent of the vote against 62 percent for Democrats, according to exit polls. But the numbers are even better than that. If you exclude the non-competitive states of California (where Brown got 76 percent of the Hispanic vote) and New York (where 69 percent voted for Cuomo), the numbers get far better.

In the battleground states of Florida, Colorado, New Mexico, and Nevada—the states that do count—the GOP did very well. Florida Gov. Rick Scott took a respectable 38 percent of his state’s Hispanic vote, winning Cuban-Americans by a huge margin. In the Cuban districts of Hialeah, Westchester, and Tamiami, he won between 65 percent and 73 percent.

While some of the Democrats’ most ardent Hispanic supporters may have stayed home to punish the president for not using executive action earlier, it is unlikely that such retribution accounts for all these results. In fact, in a Pew survey two weeks ago, illegal immigration ranked only fourth (barely ahead of the Middle East) among issues of concern to Hispanic voters. The three top-ranked issues—education, the economy, and healthcare—are perennial issues that concern all Americans.

Even as they fight the president’s illegal action, conservatives must assiduously communicate with Hispanics, presenting their solutions to all these traditional issues. For example, surveys show that Hispanics love school choice, making it the ultimate wedge issue because leftist teachers unions stand in the way. It’d be a great mistake to limit the conversation to illegal immigration.

Above all, conservatives must not confuse “Hispanics” with “illegal.” Any off-tone comment will be seized upon by the White House and played on Univision all night. Then the president will pose as the champion of all Hispanic Americans and try to ensure that for generations they will vote for policies that will make our country all but unrecognizable.

This is the transformation of our country that conservatives must fight. We are a country of shared experiences, experiences we must share with Hispanics. Those who adhere to traditional values will not be used as shock troops to help Obama “fundamentally transform the United States of America,” as the president promised to do when he was a candidate in 2008.

The stakes are high.