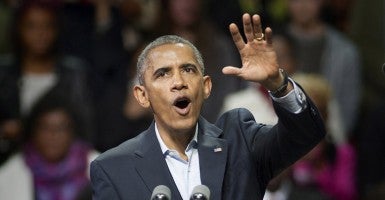 President Obama will announce executive action on immigration tomorrow night during a televised address in prime time, then travel to a Las Vegas high school Friday to rally support for the initiative.

In a video posted today to the White House Facebook page, Obama, looking casual as he sits on the edge of his desk in the Oval Office, says he will announce “some steps that I can take to start fixing our broken immigration system.”

Obama will reveal the details of his plan, which potentially will defer deportation for millions of illegal immigrants, in a speech from the White House scheduled for 8 p.m. ET.

“Everybody agrees our immigration system is broken,” Obama says in the video promoting the speech, adding:

Unfortunately, Washington has allowed the problem to fester for too long. So what I am going to be laying out are the things that I can do, with my lawful authority as president, to make the system work better, even as I continue to work with Congress and encourage them to get a bipartisan, comprehensive bill that can solve the entire problem.

>>> Commentary:  Unilateral Amnesty Really Will Be Unprecedented, and Unconstitutional

AFL-CIO inadvertently sent an internal email to reporters saying “there will be a prime time Thursday announcement” when Obama will reveal his plan.

Obama is scheduled to visit Del Sol High School in Las Vegas on Friday to expand on the details in front of a friendly audience.

The president began his renewed push for immigration reform in January 2013 during a speech at the same Las Vegas high school.

Although the details of Obama’s plan are not clear, news of his impending announcement was sure to roil some on Capitol Hill, provoking Republicans who believe the president is acting outside his power to shield up to 5 million illegal immigrants from deportation.

“Congress should fund the government while ensuring that no funds can be spent on this unlawful purpose,”  said Sen. Jeff Sessions, R-Ala., ranking member of the Budget Committee.

Sessions and other Republicans have been preparing to respond with a strategy to use the “power of the purse” to withhold the funding Obama would need to implement his plan.

Josh Earnest, the White House press secretary, said today the president would likely not support a budget that withholds funding to pay for his initiatives.

“It certainly would not be a proposal that the president would support, obviously,” Earnest said in response to a reporter’s question. “I think we would evaluate these individual proposals on the merits before we make a final decision. I wouldn’t want to hazard a guess at this point.”

“If ‘Emperor Obama’ ignores the American people and announces an amnesty plan that he himself has said over and over again exceeds his constitutional authority, he will cement his legacy of lawlessness and ruin the chances for congressional action on this issue – and many others,”  House Speaker John Boehner’s spokesman, Michael Steel, said today in a prepared statement.

Republicans who are open to immigration reform insist Congress should have a say in changing the system.

The president rightly recognized as recently as last year that ‘there is a path to get this done and that is through Congress.’ Republicans have demonstrated a willingness to work constructively towards permanent reforms. But rather than work with Congress, the president has instead chosen to foster mistrust, polarization and gridlock.

Homeland Security Secretary Jeh Johnson confirmed today in an appearance at the National Press Club that Obama would act soon on his position that he has legal authority to work around Congress to reshape the immigration system. Johnson said:

As the president has said many times, legislative action is always preferable. But we’ve waited now for years for Congress to act. And Congress has not acted. In the meantime, we’ve identified a number of executive actions that we can take within our existing legal authority to fix what everyone recognizes is a broken immigration system.

Obama’s executive action was expected to allow many parents of children who are American citizens or legal residents to obtain work documents.

Obama also will likely expand the criteria for his 2012 DACA program, or Deferred Action for Childhood Arrivals, which delayed deportation of those who were brought unlawfully to America as children.

Johnson said the executive action will include an effort to beef up security at the nation’s southern border.

Obama also was expected to increase opportunities for immigrants who have high-tech skills.

The New York Times reported that illegal immigrants benefiting from Obama’s plan will not be eligible for health benefits and other federal aid.