Looks Like Obama Is Going Big on Immigration. Now What? 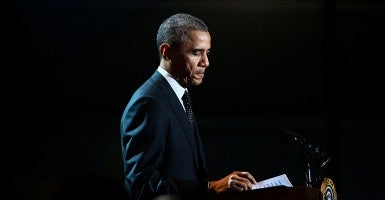 President Obama hopes to shield as many as 5 million illegal immigrants from deportation and give many of them work permits. (Photo: Oliver Douliery/Newscom)

President Obama is expected to act alone to overhaul the nation’s immigration system as soon as next week, protecting up to 5 million illegal immigrants from deportation and providing many of them with work permits.

Immigrant rights groups long have pushed the White House to provide relief — what opponents call amnesty — to many of an estimated 11.5 million illegal immigrants.

“The number being reported now is in the neighborhood of what people wanted to see,” Marc Rosenblum, director of the U.S. policy program at the Migration Policy Institute, a nonpartisan research group in Washington, said of the 5 million figure. “I don’t think you’ll see immigrant rights groups saying the White House didn’t go big enough.”

Obama had been hesitant to act over political pushback from fellow Democrats in Congress as well as accusations of lawlessness from Republicans going into last week’s midterm elections. Voters overwhelmingly favored Republicans in the balloting.

“We’re going to fight the president tooth and nail if he goes down this path,” House Speaker John Boehner, R-Ohio, said yesterday, in his second warning on the subject within 10 days. “This is the wrong way to govern. This is exactly what the American people said on Election Day they didn’t want.”

Although the White House insists the president has not made any final decisions, The New York Times yesterday joined Fox News in reporting that a key part of the administration’s plan would allow many parents of children who are American citizens or legal residents to obtain legal work documents.

Fox reported that a draft of the administration plan includes 10 points, among them increased border security, improved pay for immigration officers and expanded “deferred action” in deporting children and their parents.

>>> Has Obama Enforced Immigration Laws? It’s All in How You Count the Numbers

In June 2012, Obama created DACA, or Deferred Action for Childhood Arrivals, delaying deportation of those who were brought unlawfully to America as children.

Priorities for deportation would continue to include recent border crossers, immigrants with serious criminal convictions and those who pose a threat to national security.

If Obama were to sign such an executive order, it would have major political implications, shaping a debate in the lame-duck Congress about funding the government and provoking Republicans before they assume a Senate majority and increase their House majority in January.

Conservative lawmakers have said they will use a must-pass spending bill to challenge immigration action taken by the president that goes around Congress.

Their strategy is to use government funding bills to withhold the money the president needs to implement his plan.

One such lawmaker, Rep. Mick Mulvaney, R-S.C., told The Daily Signal in an interview yesterday that he was “surprised” by Obama’s aggressive approach after an election dominated by Republicans who campaigned against his immigration plan.

“I am surprised how the president has been so cavalier about what he intends to do on executive amnesty,” Mulvaney said, adding:

An ordinary politician would step back and say, ‘Whoa, I just got my butt kicked; maybe looking at the world a little bit differently would behoove me.’ And he seems to have simply upped his game and said he’s going to do it regardless. To have that threat hanging over us makes me wonder, ‘Oh, if he is going to play that game, what levers can we avail ourselves of? What can we hold back from this funding discussion to keep him honest?’

In light of such threats, the White House reportedly is weighing whether to announce its plan after Congress has passed the spending bill needed to keep the government operating after Dec. 11.

More than a year ago, the Democratic-led Senate passed a comprehensive measure –dubbed the Gang of Eight bill — to clear the way for millions of illegal immigrants to move toward citizenship.

The House leadership refused to move that bill or a similar one to a vote, with many members calling the approach amnesty for those who broke the law.

Although Obama’s reported plan is smaller in scale to the Senate bill, David Inserra, a homeland security expert at The Heritage Foundation, said the unilateral act would function similarly.

“In comparison to the Gang of Eight, it’s smaller, not as permanent and won’t create the same sort of fiscal costs,” Inserra said in an email. “That said, it will still incentivize more illegal immigration, harm [the Department of Homeland Security’s] ability to carry out its objectives (not to mention crippling the ability to undertake other reforms in the department), and shred the rule of law.”

Sen. Jeff Flake, R-Ariz., one of the architects of the Senate bill, said executive action by Obama would send the wrong message to the new Congress.

“As someone who supports broad reform to our immigration system, I’m very disappointed with the action I’m hearing the president will take,” Flake said in a statement to The Daily Signal. “It certainly doesn’t seem like the right way to work with a new Congress.”

Mulvaney, the Republican congressman from South Carolina, also has been open to measures that could lead to citizenship for illegal immigrants.

“l am one of the folks who have wanted to discuss our immigration policies because I think they are broken,” Mulvaney said. “But I am not going to be forced into a certain policy position by a president abusing his authority. I just think that’s bad practice.”

If Obama takes action that stands, Rosenblum said, he doesn’t expect the measures to improve deep-rooted problems with the immigration system.

“Most people, including the president, say only Congress can fix the fully dysfunctional aspects of the immigration system,” Rosenblum said:

This is not helping keep employers accountable for hiring unauthorized immigrants. It’s not shortening long wait lines for immigrants to come here legally. There is a long list of structural problems and nothing the president can do speaks to that. This is a Band-Aid. It’s a symptoms kind of fix, not a root-cause kind of fix.