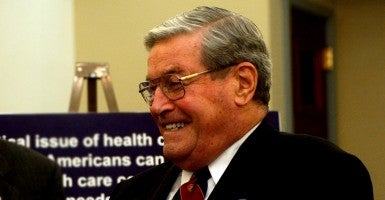 Phil Crane prior to a news conference on March 4, 2004. (Photo: UPI Photo/Michael Kleinfeld/Newscom)

His passing reminded all of us who knew Phil what a unique contribution to the modern conservative movement he had made.

On some days he was giving his famous lecture, “The Blessings of Liberty,” to audiences around the nation. For many months he was stumping for Barry Goldwater, Ronald Reagan, fellow congressional candidates and many other conservatives running for office at every level in our nation.

Phil Crane stuck to his guns, whether he was in the minority or in the majority, throughout his 35-year tenure in Washington.

After his election to the U.S. House of Representatives, he played a key role advising and leading conservatives both inside and outside of the Capitol on legislative tactics and institution building–always based on principles of our Founding Fathers.

I met Phil when he was a lecturer for the Intercollegiate Studies Institute in the early 1960s. He was teaching history at Bradley University, in Peoria, Ill., before founding a private school in the Chicago suburbs.

Phil’s reputation was that of an emerging leader: a great speaker, a motivator of the grassroots and an original thinker.

Most significantly to me, Phil was a man who understood the power of ideas. After all, he had attended Hillsdale College (and served on its board of trustees for many decades), and then earned his Ph.D. in history from Indiana University, where “his academic record had never been exceded.” Phil was the author of an important early book on the philosophical issues that defined the difference between conservatives and the reigning progressive orthodoxy, “The Democrats Dilemma“ (Regnery, 1964).

His vision for the future, based on the underlying principles of America’s Founders’ commitment to liberty, was an inspiration to all of us who knew him and who worked for him and with him.

He stuck to his guns, whether he was in the minority or in the majority, throughout his 35-year tenure in Washington.

Phil Crane’s vision for the future, based on the underlying principles of America’s Founders’ commitment to liberty, was an inspiration to all of us who knew him and who worked for him and with him.

When Phil was sworn in as the newest member of the U.S. House of Representatives, he was a representative of a minority (committed conservatives) in the minority party (the Republicans). When he left the Congress in 2004, he had helped make conservatism the mainstream of the Republican Party and of the entire U.S. political arena.

In his early Washington years, when I had the great privilege of serving as Phil’s legislative director (1970-71) and then as his chief of staff (1971-74), he was the leading light of elected conservatives in Washington.

It was Phil Crane who passionately argued that private American citizens should be permitted to own gold. It was Phil who argued as a matter of principle that federal spending for subsidies for urban mass transit systems—even in his home city of Chicago—was not an appropriate use of federal taxpayer funds. Big arguments over foreign policy and domestic issues involved Phil as a leading conservative figure in Washington and around the nation.

Battles like these—some won, others lost—may be forgotten, as the media focus on Phil’s battle to preserve the Panama Canal as an integral part of the United States. Of course, on the Panama Canal he fought side-by-side with the former governor of California, Ronald Reagan.

For those of us who worked for Phil, we remember the late-night meetings of conservative congressmen, staffers and activists, who looked to Phil Crane for leadership on policy issues.

It was during these legislative battles that Phil formed the idea of a coordinated effort among House conservatives. These conceptual discussions resulted in Crane’s vision for the Republican Study Committee to counter the long-established Democrat Study Group of liberal House members. Today, the RSC is the largest faction within the membership of the House Republicans, and it exists because Phil Crane envisioned its potential.

But my fondest memories of Phil will be of long discussions about conservative ideas and how they best can be advanced in the political milieu of Washington.

We talked about how conservatives can communicate more effectively with grassroots leaders around the nation. And we discussed how to build a conservative infrastructure to counter the establishment interests of Washington.

We decided that America needed a number of new institutions, including a new form of a policy research and communicating organization. From these discussions, Phil became an early advocate of that new conservative think tank, The Heritage Foundation. And for that, all conservatives should be grateful.

And speaking very personally, a picture of Phil holding our month-old son, flanked by Linda and me, has a special place of honor in our living room. That son is now 43 years old, by the way.

Rest in the peace of the Lord, which you have so eminently earned, my friend.