Protecting Freedom of the Press in Ferguson from the FAA 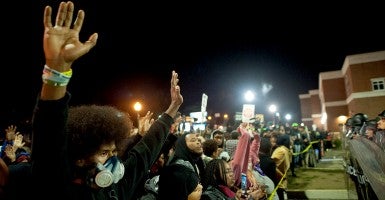 Protesters chant during a protest at the Ferguson Police Department in Ferguson, Mo. during a four-day event named Ferguson October. Weeks of protests have been sparked by the death of a black teenager. (Photo: Sait Serkan Gurbuz/Newscom)

Kirkwood Palmer is a member of the Young Leaders Program at The Heritage Foundation.

New information obtained by the Associated Press through a Freedom of Information Act request indicates that a flight ban in Ferguson, Mo., may have been intended to stop press coverage rather than just protect local law enforcement.

After reports that rounds were fired at police aircraft over Ferguson in early August, just days after Michael Brown’s death, the St. Louis County Police Department requested a no-fly zone from the Federal Aviation Administration supposedly as a safety precaution. The FAA approved an initial ban of no flights below 5,000 feet except for police and commercial aircraft.

According to the AP, another manager of the FAA’s Kansas City office said police “did not care if you ran commercial traffic through this TFR (Temporary Flight Restriction) all day long.  They didn’t want media in there.”

The FAA granted the TFR despite the fact that FAA procedures do not provide an option for a no-fly zone intended to restrict media access. Section 2 of the FAA’s Temporary Flight Restrictions guidelines states the FAA can issue a TFR to “protect persons…in the air from an existing or imminent hazard.” That includes law enforcement “situations where there is a direct hazard to aircraft (for example, shots fired at aircraft),” but TFRs do not extend to aircraft “carrying properly accredited news representatives.”

Yet the AP says that FAA managers “worked out wording they felt would keep news helicopters out of the controlled zone but not impede other air traffic.”  One of the FAA managers describes the claimed helicopter shooting as just unconfirmed “rumors.”  There was no damage to the police helicopter and no incident report filed.

Although, according to the AP, a county police spokesman “publicly denied the no-fly zone was to prevent news helicopters from covering the events,” at one point, the Kansas City FAA manager asked if the TFR could be modified so commercial flights wouldn’t be affected.  He said the revised order would allow “aircraft on final (approach) there at St. Louis. It will still keep news people out.”  “Yeah, I have no problem with that whatsoever,” a police official responded.

Using the agency to obstruct the media’s ability to report the news is a fundamental interference with First Amendment rights and outside the regulatory authority of the FAA. A federal judge in October already condemned county police for violating constitutional rights by arresting journalists and peaceful protestors during the chaotic riots.

The Justice Department has been investigating both the initial confrontation and the behavior of the Ferguson Police Department in general.  When asked about the temporary flight ban request in a press conference, Attorney General Eric Holder sidestepped the issue: “I’m not aware that the Justice Department was involved in that request and frankly don’t know an awful lot about what the nature of the request was and how [it] impacted news coverage and helicopters and things of that nature.”

But Holder was quick to add that “transparency, I think, is always a good thing, and the American people need to understand, you know, what happened, for instance, what was happening, what is happening in Ferguson. And anything that would artificially inhibit the ability of news gatherers to do what they do I think is something that needs to be avoided.”

Given this administration’s lack of transparency and hostility to the media (something which Eric Holder says he now regrets, at least with respect to one investigation), there is reason to be skeptical about the FAA’s actions and Holder’s ironic comments.