An Interview With Justice Samuel Alito on Immigration, His Mentors and Advice for a Successful Life 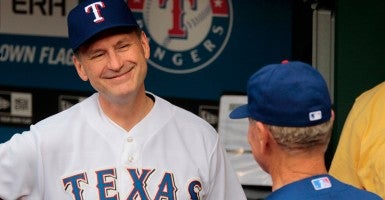 A few things you most likely don’t associate with a man who sits on the most prestigious court in America, often intensely questioning those who argue before him? Southern Italy and humble beginnings. But those are exactly the makings of Alito’s heritage—things he’s proud have helped shape who he is today.

“What my parents taught me about hard work, optimism and education still holds true.”

So how did Alito, whose father remembers evictions and dinners of nothing more than pasta and a few beans, rise to the position of history-maker? Hard work and a healthy dose of the American Dream, believing that optimism and education could turn roadblocks into minor speed bumps.

Of course, Alito’s grandparents were just four of the roughly 3 million Italian immigrants who came to America in the early 20th century—and continue to do so today.

Alito recently spoke with America Within, a project of The Heritage Foundation. He talked about his heritage, early influences and what he’d tell aspiring young men and women about making it in America. Samuel Alito was nominated by President Bush to serve on the U.S. Supreme Court on Oct. 31, 2005. (Photo: Chuck Kennedy/KRT/Newscom)

Q: When and why did your parents come to the United States?

A: All of my grandparents came to the United States from Italy during the early years of the 20th century. My father came as an infant in 1914, and my mother was born here that same year.

I believe that my grandparents came here to take advantage of the opportunities furnished by a growing country with an open society. In southern Italy, where they had lived, there were few opportunities. The society was static, with rigid social classes. Poor people, like my grandparents, had little chance to improve their lives, no matter their talents or willingness to work.

Q: Do you have a sense of what their expectations were?

A: I know that some poor immigrants from that era had unrealistic expectations and were disappointed, but I don’t think my grandparents were disappointed at all, even though they experienced some very hard times during the Great Depression. They worked hard, and I believe they never regretted their decision to come here and make a new start.

Q: Were things difficult for them at first?

A: Yes, as I mentioned, things were particularly hard during the Depression. My paternal grandfather was frequently out of work, and the family was evicted from their home. The house was often unheated, and my father recounted that supper generally consisted of pasta, which was cheap, with some beans or peas added for a little bit of protein.

My maternal grandfather was fortunate to keep his job as a laborer at a steel mill, but his pay was barely enough to support the family.

Q: Did you always feel, even as a child, that with hard work anything would be possible? Did your parents support your ambitions?

A: Although my parents grew up in poor families where little English was spoken, they both went to college and became teachers. They believed that anything was possible with hard work, and they particularly stressed the importance of education. They instilled that same belief in my sister and me. Q: Along those same lines: Who were the influential mentors in your life? Teachers, professors, family members?

A: Many people have been positive influences in my life. My parents, whom I mentioned, were the most important, but many of my teachers were also a big help to me. I am especially indebted to a 10th grade English teacher who encouraged me to read great works of literature. Another English teacher, who also taught Latin, just celebrated her 100th birthday, and I still remember what I learned in her classes. I also had some great professors in college and law school. After law school, I had the opportunity to clerk for a tremendous judge, Leonard I. Garth, on the U.S. Court of Appeals for the 3rd Circuit, the court to which I was appointed in 1990. And I learned a lot from the men who headed the Solicitor General’s Office and the Office of Legal Counsel, when I worked in those Justice Department offices in the 1980s.

Q: What was your first job?

A: After law school, I worked for a few months for a law firm in my hometown, Trenton, N.J. I then entered the Army, and after that, I began my clerkship with Judge Garth.

I learned that hard work and self-discipline can overcome many obstacles.

Q: Was there ever a defining moment growing up that could have led your life down a different path?

A: When I entered college, I thought that I wanted to be a lawyer, but by the time I was set to graduate, I was not too sure of that. Part of me wanted to get a graduate degree in political science. Had I done that, I suppose I would have become a college professor.

Q: What was the most important lesson you learned early on in life that has helped you to accomplish all you have?

A: I think I learned that hard work and self-discipline can overcome many obstacles.

Q: What would you tell aspiring young men and women—and especially children of immigrants—about finding success in America?

A: I think that what my parents taught me about hard work, optimism and education still holds true.

Q: Is there a family tradition that has been passed down from generation to generation that still is part of your life today?

A: When I was growing up, we always had a big family dinner at around noon on Sunday. I still love that whenever it is possible to gather the family together.

Originally published by America Within.