25 Years After Fall of Berlin Wall, New Threats to Our Freedom 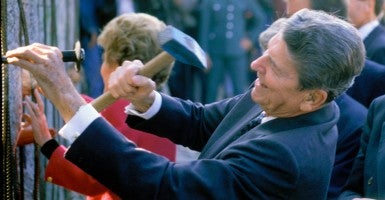 Twenty-five years ago today, the world changed when the seemingly impenetrable wall between East and West Germany was torn down by a people determined to break the stranglehold of totalitarian communism.

Evil may have been defeated in Berlin 25 years ago, but it was not eradicated.

The goal of the Soviet Union was to obliterate the very principle of freedom and to establish a global network of oppression under which all individuals were subjugated to a state that cared only about its own survival.

“It has no laws. All it has is power—power to arrest and torture, with or without laws,” as the survivor of the Soviet gulag Alexander Solzhehitsyn wrote.

It was a brutal campaign, and it almost worked.

More than 100 million people lost their lives in less than a century. Untold numbers slaved away in work camps under horrific conditions. From Latin America to Africa to Southeast Asia, supporters of communism were on the march. The Soviets seemed so powerful that the only option for America and our allies seemed to be to reach some sort of accommodation with them.

But then a new American president charted a different course. He proposed a simple paradigm of “We win, they lose.”

In 1987, Ronald Reagan stood in front of the grim barrier that had been erected in 1961 to forcibly contain the freedom represented by West Berlin and demanded its removal, “General Secretary Gorbachev, if you seek peace, if you seek prosperity for the Soviet Union and Eastern Europe, if you seek liberalization … Mr. Gorbachev, tear down this wall!”

With his allies, those tireless advocates for religious and economic freedom Pope John Paul II and Prime Minister Margaret Thatcher, Reagan refused to accept the tyranny of communism as inevitable.

Less than a year after Reagan left office, his vision became a reality. No wall could hold back the waves of protest that swept from the Baltic through eastern Europe.

Where once armed guards and barbed wire kept terrified citizens under Soviet control, a peaceful nation, a friend of the United States, began to flourish.

It might be tempting to imagine of this trajectory as part of a preordained evolution toward liberal democracy and conclude that the bad old days of the Soviet Union are a thing of the past. But the events of the last year have demonstrated that this is very far from the truth.

Evil may have been defeated in Berlin 25 years ago, but it was not eradicated. An aggressive Russia is once again massing in the region, threatening to extinguish the hard-fought gains of the millions of people whose most cherished dream was to live in freedom.

So rather than greeting this anniversary with self-congratulatory complacency, a renewed resolve is called for. We must resolve to remain vigilant against all those who threaten our liberties. We must resolve to embrace the opportunities those freedoms provide so America continues to set a shining example of what a truly free people can achieve. We must resolve to encourage those yearning to be free to join us and our allies as we work to create a more stable and prosperous world.

For if we stand strong today—and every day—we may celebrate even more remarkable victories for freedom 25 years from now.