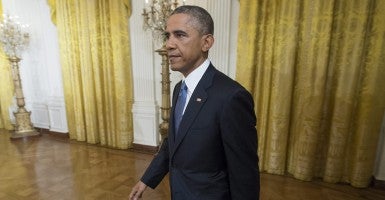 Having received a walloping in the elections, President Obama has promised to double down by tearing the country apart over illegal immigration. “I’ve shown a lot of patience,” he said with characteristic conceit at Wednesday’s contrition-free press conference.

Make no mistake. It will be the opening salvo of a two-year campaign that will decide which course the country takes: one that fundamentally alters our way of life or one that conserves our many blessings.

The executive action he promised on Wednesday–assuming it will legalize foreign nationals residing in this country illegally–will be divisive by design. The President intends for conservatives to self-cannibalize and in the process become unappealing to the growing Hispanic sector in society for generations.

Conservatives must therefore have a clear-eyed understanding of what is being done in this high-stakes game, and refuse to debate on the President’s terms. Illegal immigration is an important problem for all Americans, but as the newly elected majority fights this executive action in Congress on the grounds that it is illegal they, and all conservatives, must set their own narrative.

The first step is not to confuse “illegal immigrant” and “Hispanic.” There are an estimated 6 million Mexicans illegally in this country, and a further 2.6 million from Central America, according to the Pew Hispanic Center. How many legal Hispanics of all groups are here? About 46 million.

Obama intends for conservatives to self-cannibalize and in the process become unappealing to the growing Hispanic sector in society for generations.

Their share of the voting population has gone from 4.7 percent in 1996 to 8.4 percent in 2012, according to the U.S. Census. If Hispanics voted at the same rate as non-Hispanic citizens, their share would be closer to 11 percent. In key battleground states, these numbers grow. In Colorado, they account for 14.2 percent of eligible voters, and in New Mexico they are over 40 percent. In Texas, a state liberals are working hard to turn blue, they are 27.4 percent of the electorate. So clearly, the stakes are high.

The next step is obviously not to talk to or about Hispanics solely in the context of illegal immigration. The trope that illegal immigration is “the gateway issue” that politicians must cross on their way to winning Hispanic hearts is just that, a trope.

According to a Pew Research poll published just last week, only 36 percent of Hispanic registered voters say they would not vote for a candidate who disagreed with them on illegal immigration. In fact, illegal immigration comes fourth in a list of five issues that are important to them, behind education (92 percent), jobs and the economy (91 percent) and health care (86 percent).

Illegal immigration, at 73 percent, barely edges out the Middle East, of all things, (66 percent) as an issue that is extremely or very important.

And this is after nearly everyone, from Univision (where illegal immigration is 24/7 ubiquitous) to some in the conservative base itself, has been telling Hispanics that this is the issue. Those stubborn legal citizens think that education and the economy are much more important to their success than illegal immigration.

Conservatives therefore should stop making the gateway question a self-fulfilling prophesy. If they addressed Hispanics on their top issue, education, they would find it is ready made for the conservative message.

Hispanics strongly support one of the biggest conservative policy causes, school choice. According to the poll in June by the Friedman Foundation, Hispanics support charter schools at a higher rate (68 percent) than either blacks (59 percent) or non-Hispanic whites (61 percent). Support for voucher programs is even stronger at 72 percent, ahead of whites by 11 percentage points. The same is true for education savings accounts and tax credit scholarship systems.

More importantly, the intensity of feeling for all school choice programs was strongest among Hispanics. That’s because Hispanics are keenly aware of the educational achievement gap with other groups. The Department of Education’s National Assessment of Educational Progress shows Hispanic kids underscoring whites by large averages in both mathematics and reading.

And on jobs and the economy, conservatives have a clear case to make. All they have to do is compare the fate of Hispanics in conservative Texas to that of liberal California. Hispanics in the Lone Star State outperform those in the Golden State on important cultural indicators.

As for healthcare, Hispanics have said a loud “no, gracias” to Obamacare, despite heavy flacking by the Department of Health and Human Services and administration surrogates in the Hispanic activist community.

None of the policy prescriptions conservatives would offer Hispanics on any of these fronts would differ in the least from what they would say to anyone else in the country. In fact, conservatives would do well if they stopped addressing Hispanics as “minorities,” a concept liberals created in the 1970s because identity politics fits their ideology.

But when President Obama opens the can of worms he intends to dump on the country, conservatives must be ready to address Hispanics on the issues that matter most to them, and do it with respect and affection.

And they should ask, what will a cynical attempt to ram through executive action do to ease any of the problems that trouble voting Hispanics the most? A big fat nada.