11 to Watch: Meet the New Crop of Tea Party Conservatives in Congress 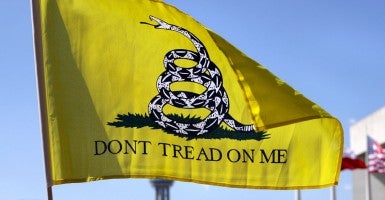 The incoming wave of Republicans who will shake up Washington’s political landscape includes some tea party candidates who promise to promote an agenda based on conservative principles such as limited government, traditional American values and a strong national defense.

For those who’d like to get to know these fresh faces, The Daily Signal created a roundup of the newest tea party favorites in the House and Senate.

Bio: Sasse, 42, currently serves as president of Midland University in Fremont, Neb. Sasse and his wife, Melissa, have been married for 19 years and homeschool their three daughters, Elizabeth, Alexandra and Breck. He is a native of Plainview, Neb.

What the tea party likes:  Sasse has spoken out extensively about repealing and replacing the Affordable Care Act, which his daughters say he “despises.” During his Senate campaign, he championed limited government and said he would push for entitlement reform. A favored reform:  tying the retirement age to life expectancy. He also supports school choice for parents and their children.

Bio: Cotton, 37, served one term representing the southwestern part of Arkansas in the House before making his successful bid for Senate against incumbent Democrat Mark Pryor on themes of restoring the principles of limited government and ending corporate cronyism.

Cotton was born in Dardanelle, Ark., and previously worked as a consultant for McKinsey and Co.  As an Army captain, he served in both Iraq and Afghanistan. Cotton married girlfriend Anna Peckham in March, and the two announced in October that they’re expecting a baby boy.

What the tea party likes: Cotton advocates a robust national defense, called the Iraq War “just and noble” and criticized President Obama for drawing a red line in Syria over chemical weapons. Cotton voted against the Farm Bill because of the inclusion of the ever-growing food stamp program. He is a staunch opponent of the Affordable Care Act, hitting Pryor on Obamacare throughout the campaign. On immigration reform, Cotton calls for enforcing laws currently on the books and strengthening border security.

Introducing my first grandchild, Emmaline Bliss Loudermilk. She weighs 6lbs 12oz. Thank you for all your prayers. pic.twitter.com/OVcSLOz4HQ

He met his wife, Desiree, 30 years ago when they both served in a church bus ministry in Anchorage, Alaska. They now have three grown children and one daughter-in-law.

The Loudermilk family is active in the Civil Air Patrol, providing search-and-rescue, disaster relief and other emergency services throughout Georgia.

What the tea party likes:  As  a conservative leader in the Georgia House and State Senate, Loudermilk worked to improve government transparency and reduce the size of government.

His top campaign issues included defunding and fully repealing Obamacare, implementing a fair or flat tax, and advocating traditional family values. He spoke out against President Obama’s plan to use executive power to unilaterally allow millions of illegal immigrants to remain in the U.S. and move toward citizenship.

Thank you to everyone who helped make our historic victory possible. Michele and I will be forever grateful. pic.twitter.com/pNa5Mqf5fe

Bio: Ratcliffe, 49, who served eight years as mayor of Heath, Texas, will become the congressman from the 4th District in the northeastern part of the state. He regards one of his biggest accomplishments to be balancing Heath’s budget without raising taxes during the recession.

Ratcliffe was a U.S. attorney and chief of anti-terrorism and national security for the Eastern District of Texas under President George W. Bush.

He is the youngest of six children born to two schoolteachers. Ratcliffe has been married to wife Michele for 23 years. They have two daughters.

What the tea party likes:

Billed as a reform-minded leader, Ratcliffe also gets credit for old-fashioned understanding of the importance of  balancing a budget.  During the campaign, he promised to repeal and replace Obamacare, secure U.S. borders, and oppose amnesty for illegal immigrants.

Super way to start the day – the Brat Pack in New Kent is fired up to vote tomorrow! Thx for the support! #lastlap pic.twitter.com/ZAWFSNKjih

Bio: Brat, 49, became famous overnight for toppling House Majority Leader Eric Cantor in District 7’s primary election June 11. An economics professor at Randolph–Macon College, he is a Catholic. Over the years,  he served Virginia in various capacities as an economic adviser.

Brat touts his upbringing in the rural Midwest as the basis for his conservative values. He and his wife, Laura, have two children — Jonathan, 15, and Sophia, 11.

What the tea party likes: Voters in central Virginia rallied around Brat’s clear message: “Let’s get our economy back on track, end the reckless spending, secure the border and repeal Obamacare.”

Yesterday, our family was blessed with a new addition: Gabrielle Mooney. Thank you for well wishes & prayers! #wv02 pic.twitter.com/uwPklhTQ7M

Bio: Mooney, 43, is the son of a Cuban refugee and a Vietnam veteran. His election in the 2nd District gave the GOP all three of West Virginia’s House seats. Mooney served in the Maryland State Senate from 1999 to 2011, representing Frederick and Washington counties. He also is a former chairman of the Maryland Republican Party.

Mooney and his wife, Grace, decided to leave heavily Democratic Maryland and move across the Potomac River to raise their family in West Virginia. They homeschool their two children in Charles Town and welcomed their third child in October.

What the tea party likes: Although Mooney was criticized for being a Maryland transplant, he made inroads with voters in West Virginia’s capital city of Charleston by emphasizing the need to cut government spending and reduce taxes and advocating Second Amendment rights and pro-life family values.

Gary is honored to serve as your next US Congressman! #PalmerforAlabama #AL06 #alpolitics pic.twitter.com/fMMPDnAw8q

What the tea party likes: Given his background as president and CEO of the Alabama Policy Institute, most voters knew what they would get by electing Palmer.  He campaigned on “sound public policies that emphasize a limited government, free markets, the rule of law and strong families.” He wasn’t shy in saying he is for “repealing and replacing” the Affordable Care Act with a national health care policy that allows Americans to buy the health insurance of their choice.

Bio: A radio show host turned politician, Jody Hice, 54, captured the attention of eastern Georgia’s 10th Congressional District this year with a call to “renew America.” A Southern Baptist pastor, he got his undergraduate degree from Asbury College and received his doctorate from Luther Rice.

A Georgia native, Hice has served churches in Barrow, Gwinnett and Walton counties for nearly 25 years. He and Dee Dee, his wife of nearly 30 years, live in Walton County. They  have two adult daughters and three grandchildren.

What the tea party likes: Hice advocates religious freedom and conservative social principles. He campaigned on energy independence, reining in government spending, improving the the economy and the job picture, and maintaining a strong national defense. He also wants to repeal and replace Obamacare.

Bio: Grothman, 59, is a lawyer born and raised in the Badger State.  He defeated Democratic opponent Mark Harris to take the 6th District seat.

Grothman is assistant majority leader of the Wisconsin Senate, representing the 20th District since 2004. Before that, he represented the West Bend area in the state Assembly.

What the tea party likes: Grothman focused his campaign on budget and tax reform, education and traditional values.

We did it! I am honored to be the Republican nominee for the 4th Congressional District. pic.twitter.com/TZh7S0FUop

Bio: Buck, 55, elected to represent the 11th District, isn’t known for shying away from hard work and conservative principles. He worked his way through high school, college and law school in a variety of jobs. He spent the past 10 years serving as district attorney of Weld County, Colo., assembling what he considers a strong record of criminal prosecution and crime prevention.

For Buck, conservative politics is a family affair. His wife, Perry, is vice chairman of the Colorado Republican Party and is a representative in the Colorado House. They have two children, Cody and Kaitlin.

What the tea party likes: During his campaign, Buck advocated a balanced budget amendment, limited government and reduced federal spending.

Bio: From Edina, Minn., Emmer, 53, has a resume that includes founding his own law firm and serving six years in the Minnesota House of Representatives. He made a bid for the governorship in 2010, but ultimately fell one-half of 1 percent short of the win.

After his race for governor, Emmer began hosting a conservative talk radio show in the Land of 10,000 Lakes. He says he first entered politics because of family. He and his wife, Jacquie, have seven children: six boys and a girl.

In the state legislature, Emmer sponsored an amendment to nullify state laws and supported a change to the Minnesota state constitution to confirm that marriage is the union of one man and one woman. He advocated for a balanced budget during his campaigns for the governorship and House, and questioned lawmakers’ willingness to vote for bills they haven’t read.