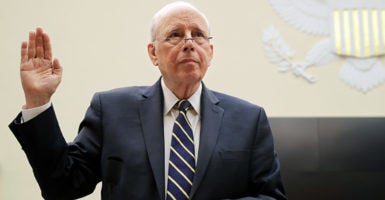 John Dean, a former chief White House counsel who provided key testimony in the Watergate probe more than 45 years ago, is sworn in Monday before testifying about the Mueller report to the House Judiciary Committee. (Photo: Chip Somodevilla/Getty Images)

Watergate figure John Dean, who served as White House counsel for Richard Nixon, drew parallels Monday between the scandal that led to his conviction and toppled his former boss and special counsel Robert Mueller’s probe of alleged Russian government ties to the campaign of President Donald Trump.

Dean joined former Justice Department lawyers for a House Judiciary Committee hearing in what Chairman Jerry Nadler, D-N.Y., said was the “first in a series” examining the Mueller report.

Released publicly April 18, the Mueller report cleared Trump and his campaign of conspiring with Russia to influence the 2016 presidential election, but did not make a determination on whether the president obstructed justice as the probe went on.

Attorney General William Barr, in consultation with other Justice Department lawyers, decided the evidence did not amount to obstruction of justice.

Here are some of the biggest moments from the House hearing:

Dean, 80, told the committee that the Mueller report is a “road map” for Congress, as was the grand jury report on Watergate that was transmitted to Congress.

“In both situations, the White House counsel was implicated in the cover-up activity,” said Dean, who lost his law license and went to prison for four months for his role in the Watergate cover-up. “While I was an active participant in the cover-up for a period of time, there is absolutely no information whatsoever that Trump’s White House counsel, Don McGahn, participated in any illegal or improper activity. To the contrary, there is evidence he prevented several obstruction attempts.”

The Mueller report states that McGahn declined to follow Trump’s instruction to push for firing Mueller.

Dean said McGahn should testify to Congress, calling him “the most prominent fact witness.”

Dean also talked about Trump’s firing in May 2017 of FBI Director James Comey.

Rep. Louie Gohmert, R-Texas, also found similarities to Watergate stemming from the 2016 election, but his focused on FBI surveillance of the Trump campaign.

“There are similarities, you are right, with regard to Watergate, as you alluded to,” Gohmert told Dean. “In both, an administration was seeking to illegally spy on another candidate. In both, people were hired to gather evidence that could be used against a candidate.”

In Watergate, the Committee to Re-Elect the President hired burglars to break into the Democratic headquarters. In Watergate, administration officials tried to find ways to use federal dollars to pay for their criminal spying.

In Russiagate, members of the federal government used the intel, DOJ, and FBI communities to attempt to defeat a presidential candidate, and when that failed, to have him removed from office. In Russiagate, the Clinton campaign and the FBI paid a foreign agent to collude with agents to produce opposition research that turned out [to be] completely false–as the Mueller report indicated–that could be used to commit a fraud upon the FISA court to get warrants to spy on an opposition campaign.

“Mr. Dean, how many American presidents have you accused of being Richard Nixon?” Gaetz asked Dean.

Dean responded: “I actually wrote a book about Mr. Bush and Mr. Cheney with the title, ‘Worse Than Watergate.’”

Gaetz: “Did you make money on that book?”

Dean: “It was a very successful book.”

Gaetz: “How much money did you make on it?”

Dean also has been a contributor on CNN, frequently critical of Trump. Gaetz later asked, “How much money do you make from CNN?”

Nadler objected to the questioning, and Gaetz defended the basis for it.

“Mr. Dean has made a cottage industry out of accusing presidents of acting like Richard Nixon,” Gaetz said. “I would like to know how much money he makes based on making these accusations and exploiting them for his own economic interests.”

The two then engaged in an argument as Dean fired back: “Mr. Gaetz, I appreciate you were not born at the time this all happened. It’s not by choice that I’ve done a lot of this, it’s that I’ve been dragged into it.”

Gaetz: “Who forced you to accuse George W. Bush of being Richard Nixon?”

Dean: “That was right after I spent 10 years in a lawsuit knocking down statements about what my role had and hadn’t been.”

Gaetz said the entire hearing was a result of Democrats’ infighting over impeaching Trump, which House Speaker Nancy Pelosi, D-Calif., is trying to stave off.

“The chairman of the committee has gone to the speaker of the House about opening an impeachment inquiry, and she has said no,” Gaetz said, adding:

So instead of opening an impeachment inquiry into Donald Trump, which is what the chairman wants to do and I presume the majority of Democrats want to do, we are here reopening the impeachment inquiry into Richard Nixon, sort of playing out our own version of  ‘That 70s Show.’ You are functionally here as a prop because they can’t impeach President Trump, because 70% of Democrats want something that 60% of Americans don’t.

The Mueller report includes 10 examples of possible obstruction by Trump, but neither accused nor exonerated the president of the offense. The examples included the Comey firing, pushing then-Attorney General Jeff Sessions to “unrecuse” himself from the Russia matter and limit the scope of the probe, and the president’s consideration of firing Mueller.

“[U]nlike cases in which a subject engages in obstruction of justice to cover up a crime,” the report says, “the evidence we obtained did not establish that the President was involved in an underlying crime related to Russian election interference.”

However, in testimony Monday to the committee, Joyce White Vance, a former U.S. attorney for the Northern District of Alabama, said an underlying crime isn’t needed for an obstruction prosecution.

Vance said she would indict Trump on related charges if he were not president, and is confident she would get a conviction that would survive an appeal.

“That’s why obstruction does not require proof of an underlying crime,” Vance said. “The law says so and logic tells us the same thing. If an underlying crime were required to obtain an obstruction conviction, then the most successful obstructors, the ones who did the best job of concealing their crimes from investigators, would get off with no charges at all.”

But an underlying crime is key, argued John Malcolm, director of the Edwin Meese III Center for Legal and Judicial Studies at The Heritage Foundation.

“Regarding the so-called collusion issue, the report states that ‘the investigation did not establish that members of the Trump campaign conspired or coordinated with the Russian government in its election interference activities,’” Malcolm said, quoting Volume 1 of the report.

For this reason, Malcolm added, “I am less enthusiastic about Volume II of the special counsel’s report, which is the subject of this hearing.” He continued:

It is possible for an individual to commit the crime of obstruction of justice to impede an investigation even when he did not commit the underlying offense that is being investigated, perhaps to avoid the disclosure of embarrassing but noncriminal information, [but] such a prosecution would be extremely rare.

In the overwhelming majority of cases, individuals who attempt to obstruct justice do so because they know darn well that they committed the crime that is being investigated and fear that the investigation will uncover that fact. Certainly, any prosecutor considering charging someone with obstruction of justice would give considerable weight if his or her investigation revealed that the person did not, in fact, commit the underlying offense that was being investigated, as happened here.

Rep. Doug Collins, R-Ga., ranking member of the committee, referred to something then-President Barack Obama said in a 2012 debate with Republican presidential nominee Mitt Romney, but turning the phrase for the hearing.

Obama said at the time: “Gov. Romney, … a few months ago when you were asked what is the biggest geopolitical group facing America, you said Russia. Not al-Qaida, you said Russia. And the 1980s are now calling to ask for their foreign policy back. Because the Cold War has been over for 20 years.”

Collins, focused on Dean’s appearance and his Watergate notoriety, recalled the moment.

“It was brought up when one of our candidates talked about Russia being a threat, and former President Obama said the ’80s are asking for their foreign policy back,” Collins said. “Well, guess what? This committee is now hearing from the ’70s, and they want their star witness back.”

Collins called for the committee to focus on real priorities.

“Why can’t Democrats finally focus on the real threat? Russian interference in American elections,” he said.