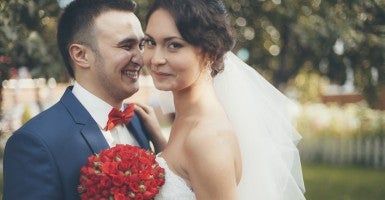 It’s hard to imagine a more bedrock American right than being free to live according to your religious convictions. The very idea of being forced to violate your beliefs seems unthinkable.

Unless you happen to believe that marriage refers exclusively to the union of a man and a woman. Because more and more often, the government is penalizing and coercing those who simply wish to be free to live in accordance with that belief.

In Idaho, for example, city officials have told ordained ministers that they have to celebrate same-sex weddings – or face fines and jail time.

Donald and Evelyn Knapp, both ordained ministers, run Hitching Post Wedding Chapel. They are “evangelical Christians who hold to historic Christian beliefs” that “God created two distinct genders in His image” and “that God ordained marriage to be between one man and one woman.”

Officials from Coeur d’Alene, Idaho, told the Knapps that because the city has a nondiscrimination statute that includes sexual orientation and gender identity, and because the 9th U.S. Circuit Court of Appeals struck down Idaho’s constitutional amendment defining marriage as the union of a man and a woman, the couple would have to officiate at same-sex weddings.

Under the law, the Knapps could face a 180-day jail term and $1,000 fine for each day they decline to celebrate same-sex weddings. A week of honoring their faith and declining to perform the ceremony could cost the couple three and a half years in jail and $7,000 in fines.

This is absurd. And yet, because various state and local governments have passed laws creating special privileges based on “sexual orientation and gender identity” (dubbed SOGI), this sort of government harassment is likely to increase. For it treats the belief that marriage is the union of a man and woman as if it were insidious discrimination.

After all, protecting religious liberty and the rights of conscience does not infringe on anyone’s sexual freedoms. No one has a right to have the government force a particular minister to marry them. Some citizens may conclude that they cannot in good conscience participate in same-sex ceremonies, from priests and pastors to bakers and florists. They should not be forced to choose between their beliefs and their livelihood.

Congress should be at the forefront of protecting religious liberty and the rights of conscience.

Lawmakers should ensure that government cannot discriminate against any individual or group, whether nonprofit or for-profit, based on their beliefs that marriage is the union of a man and woman or that sexual relations are reserved for marriage.

And the government should be prohibited from discriminating against such groups or individuals in tax policy, employment, licensing, accreditation or contracting.

It’s unclear how city officials in Idaho could justify forcing the Knapps to perform a same-sex wedding. There are numerous other venues where a same-sex couple could get married. Indeed, there is a county clerk’s office directly across the street from the chapel.

States must protect the rights of Americans and the associations they form – both non-profit and for-profit – to speak and act in the public square in accordance with their beliefs.

It is particularly egregious that the city would coerce ordained ministers to celebrate a religious ceremony in their chapel. The Alliance Defending Freedom has filed a motion arguing that the city’s law “violates (the Knapps’s) First and 14th Amendment rights to freedom of speech, the free exercise of religion, substantive due process and equal protection.”

Citizens must work to prevent or repeal laws that create special privileges based on sexual orientation and gender identity. We must also insist on laws that protect religious freedom and the rights of conscience.