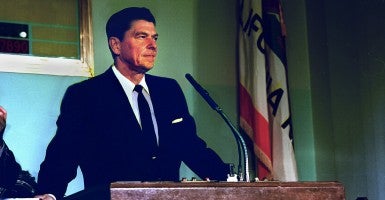 Fifty years ago to the day, a political star was born in America. His name was Ronald Reagan, and he seized the national imagination with a mesmerizing television address titled “A Time for Choosing.”

The address was described by political analysts David Broder and Stephen Hess as “the most successful political debut since William Jennings Bryan electrified the 1896 Democratic convention.”

It brought in $1 million in contributions to the Republican National Committee in the first 24 hours. It shifted many votes — the Republican nominee Barry Goldwater gained several percentage points following the telecast.

Republican leaders said they would not have approached Reagan to run for governor of California in 1966 if he had not made his TV talk. What was there about this speech and the man who delivered it that altered the course of history?

As Republican presidential hopefuls consider what to say and how to say it leading up to the 2016 election, they would do well to examine the speech that transformed Ronald Reagan into a national political leader overnight.

“A Time for Choosing” was Reagan’s work from beginning to end. He researched it, he wrote it, and he delivered it without a teleprompter or a manuscript, relying on a packet of 4-by-6-inch note cards on which he had written, in his own shorthand, key phrases, quotes, and statistics.

The “choice” before the American people, he began, is between two starkly different visions of America and the kind of government we should have. One side says “you never had it so good” and the nation is at peace.

But, Reagan asked, do they really mean peace or do “they mean we just want to be left in peace”? There can be no real peace, he said, when “we’re at war with the most dangerous enemy that has ever faced mankind in his long climb from the swamp to the stars.”

If we lose our freedom, history will record with the greatest astonishment that “those who had the most to lose did the least to prevent its happening.” He sharpened the differences between the two sides and the importance of the choice. It’s time, he said, to ask ourselves “if we still know the freedoms that were intended for us by the Founding Fathers.”

Those freedoms are based on one idea:

… that government is beholden to the people, that it has no other source of power except the sovereign people, is still the newest and the most unique idea in all the long history of man’s relation to man.

The choice before the people, Reagan stated, is simple:

… whether we believe in our capacity for self-government or whether we abandon the American Revolution and confess that a little intellectual elite in a far-distant capital can plan our lives for us better than we can plan them ourselves.

Any conservative, then or now, would be hard pressed to present a more concise argument against the progressive paradigm.

Next, Reagan addressed and rejected the liberal argument that “we have to choose between a left or right.” He said:

There is no such thing as left or right,” he argued. “There’s only an up or down, up to man’s age-old dream of individual freedom consistent with law and order, or down to the ant heap of totalitarianism.

He quoted liberal Democratic voices such as those of Sen.  J. William Fulbright of Arkansas, who said that the Constitution was “outmoded,” and Sen. Joseph Clark of Pennsylvania, who defined liberalism as “meeting the material needs of the masses through the full power of centralized government.”

Reagan responded that he resented it when a representative of the people referred “to you and me, the free men and women of this country, as ‘the masses.’” As for the “full power of centralized government,” that was exactly what the Founding Fathers sought to minimize because they knew that “a government can’t control the economy without controlling people.”

Reagan proceeded to give examples in which government had tried and failed to solve problems, such as farm subsidies, public housing, and unemployment, poverty, and juvenile-delinquency programs.

He used humor to expose the failed policies of the other side: “The trouble with our liberal friends is not that they’re ignorant; it’s just that they know so much that isn’t so.”

Addressing key issues, Reagan suggested commonsense solutions, such as introducing voluntary features in Social Security and stopping foreign aid that is used to buy “dress suits for Greek undertakers [and] extra wives for Kenyan government officials.” From the beginning to the end of his address, his primary target was the ever-increasing size of government.

“Actually,” he said, “a government bureau is the nearest thing to eternal life we’ll ever see on this earth.”

He concluded by laying out the most important choice of all — peace through strength or peace through appeasement. Conceding there was a risk in standing firm, Reagan declared that “you and I do not believe that life is so dear and peace so sweet as to be purchased at the price of chains and slavery.” He quoted Alexander Hamilton, who said that “a nation which can prefer disgrace to danger is prepared for a master, and deserves one.”

Borrowing from Franklin D. Roosevelt and Abraham Lincoln, Reagan said to an audience of millions:

You and I have a rendezvous with destiny. We’ll preserve for our children this, the last best hope of man on earth, or we’ll sentence them to take the last step into a thousand years of darkness.

But he finished with a message of hope and optimism: “You and I have the ability and the dignity and the right to make our own decisions and determine our own destiny.”

Twenty-five years later, in his 1989 farewell address, President Reagan displayed his sure command of political rhetoric by denying that he was merely a “Great Communicator.” He said, disarmingly, “I wasn’t a great communicator, but I communicated great things.”

The truth is that Ronald Reagan was a great communicator, one of the greatest in American politics, who communicated great things such as liberty, justice, and equality that have shaped America.

Isn’t it time, indeed past time, for another great communicator who can articulate the unique American spirit?