‘A Little Like a War:’ He Treated Ebola in Africa, Now Helps Prepare at Home 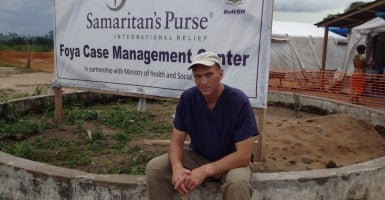 'I was upset about how it unfolded,' Tim Mosher, here in Liberia, says of Ebola's advent in the U.S. (Photos courtesy Tim Mosher)

When Ebola hit America and a cascade of unfortunate events followed, Tim Mosher began nudging his hospital to enhance its planned response in case the deadly virus were to come there.

Mosher, who had confronted the disease in West Africa and treated it successfully, is the only person at the Ohio-based hospital with such experience. He anticipated that federal guidelines followed by the hospital would be inadequate.

However, unfolding events–the infected man from Liberia, Thomas Eric Duncan, died inside the Dallas hospital that treated him, and two of his nurses developed the virus–surprised Mosher.

“Over time, I was imagining what we would do if it got here,” says Mosher, 53, who treated Ebola in Liberia for a week last summer as part of a team of 20 Americans from the Christian ministry Samaritan’s Purse. “I was very upset about how it unfolded. I couldn’t believe it.”

Mosher, like many, blames the Center for Disease Control and Prevention for having lax guidelines regarding how caregivers should protect themselves.

Most American hospitals followed such guidelines, including Texas Health Presbyterian Hospital in Dallas, where Duncan was treated.

“The hospital did the best they could,” Mosher says. “I knew immediately [the standards] were inadequate.”

Mosher, a nurse practitioner, medical volunteer and former firefighter, first spoke in September with The Daily Signal about his experience in Liberia.

The Daily Signal caught up with Mosher again this past week, asking him to reflect on the U.S. response so far to Ebola.

Today, he shares his story and expertise with a larger audience. The German Air Force is among the units training volunteers to fight Ebola. (Photo: Newscom)

Last week, Mosher began training nurses and physicians at the hospital where he works about how to treat Ebola, using new standards issued by the CDC.

He requests that The Daily Signal not name the hospital in Lima, Ohio, but it is part of a network of hospitals in the state.

Mosher, free of the shackles of quarantine but still consumed with fighting Ebola, says the hospital was in the process of upgrading treatment procedures. It would have done so regardless of the change in CDC guidelines, he adds.

Should his hospital encounter an Ebola case, it likely would transfer the person to another facility with an infectious disease isolation unit after three days.

The new federal guidelines, which are optional, are based on strict protocols used for years by Doctors Without Borders.

When Mosher volunteered with Samaritan’s Purse, he followed that method.

The revamped CDC guidelines for those caring for Ebola patients in America specify: “A layperson can watch a TV and see the difference,” Mosher says, adding:

Now, everyone gets it. There were lots of open [exposed] areas before. If you don’t have good protection to begin with, it’s hard to criticize how you took it off.

The most dangerous part of the treatment process, Mosher says, is safely removing gear when it is covered with “fluid saturation.”

The Doctors Without Borders procedure remains slightly different because in Africa, where the organization treats patients in field hospitals, it is possible to disinfect workers with a sprayed chlorine solution as they stand in a gravel pit.

A hospital, and even an individual caretaker, can boost protections outside the CDC protocol, he says.

It’s like when I was a fireman and I worked with hazardous materials. I was given rubber boots, but I bought leather boots on my own. You can go one or two steps higher. You can always overdo it, but you can never underdo it. As I caregiver, I can say this is what I am doing or not doing. This past week, more than 40 people who had been isolated for three weeks after coming into contact with Duncan returned to their lives.

Similarly, Mosher re-entered his routine after a 21-day quarantine following his return from Liberia.

“Quarantine was worse than being in Liberia for me,” Mosher says.

You can use some decompression, but there’s no one around. I am a highly driven, duty-oriented person, but I can’t do my job. You want to talk about it, but you are a bit of a pariah.

After returning from treating Ebola in Liberia and being quarantined, Tim Mosher said he felt like a “pariah.”

To escape, Mosher sometimes would go outside and walk for miles.

He observes people are “definitely on edge” about Ebola, but he doesn’t think any stigma has been attached to him.

Mosher says he won’t return to West Africa anytime soon because he dreads the quarantine period. He continues to track the work of Samaritan’s Purse there, though.

In a recent strategy change, he says, the ministry has gone into rural areas to distribute kits and teach families to use them to care for those in their own home.

He also tracks the government’s response to Ebola. He knows other Americans oppose it,  but he agrees with President Obama’s decision to send the U.S. military to provide logistics, equipment and other support in West Africa.

“As long as they’re not face down with Ebola directly, I’m OK with it,” Mosher says, recalling the military’s support when he was in Haiti on a medical mission after the earthquake there. “They are so good at what they do. It’s a lot like a military struggle and it’s a little like a war.” Mosher says he has confidence in his own hospital to treat Ebola, and he wouldn’t hesitate to lead the way.

“Morale is good here,” Mosher says, confiding that readiness has improved by the day. “I have no doubt we could treat an Ebola patient.”

He doesn’t have a solution to beat Ebola.

>>> From Africa to the US: Ebola in One Timeline

Despite wariness and fear, Mosher says, he believes Ebola provides an opportunity for the nation to assert itself.

“We Americans want to wish everything away,” he says.

That’s not going to happen here. This is the perfect example of how no one in the world can step up like we can. We have to lead, because that’s who we are. We have to stay the course.